Published by
David Lange,
May 16, 2022
The Bundesliga is the highest level of professional football in Germany. The league was founded in its current format in 1963 and today is comprised of 18 teams. The composition of teams changes every season through a process of relegation with the second division of German football, the 2. Bundesliga. In the 2020/21 season, the total revenue of the Bundesliga amounted to 3.47 billion euros. The games were attended by an average of 22.34 thousand spectators in the 2021/22 season.
Revenue from match day, advertising and media receipts made up between 20 and 30 percent each of the total revenue. Revenue from transfers, merchandising and other revenue accounted for the rest, approximately 25 percent. The total league wide revenue from kit sponsorships was at an estimated 274 million euros in the 2020/21 season. FC Bayern Munich took in the most from that revenue stream amongst Bundesliga clubs with a reported 30 million euros in revenue from its kit sponsor Deutsche Telekom. The club from Bavaria, alongside FC Schalke 04, also leads the league in income from the marketing of its stadium naming rights with an annual payment of six million euros from their naming rights sponsors. FC Bayern Munich is the most successful club in the German Bundesliga, both financially and in terms of league titles (29 ‘Meisterschaften’ in total). In the 2020/21 season, FC Bayern Munich generated about 644 million euros in revenue. Borussia Dortmund, the second-most successful team over the past few years, reported revenues of around 442 million euros in 2019/20. Brand Finance ascribes the brand FC Bayern Munich a value of about 1.26 billion U.S. dollars in 2021, while Forbes puts the value of the team at 3.22 billion U.S. dollars for the same period. In comparison, the team value of Borussia Dortmund was given as 1.9 billion U.S. dollars according to Forbes in 2021.

In the following 5 chapters, you will quickly find the 36 most important statistics relating to "Bundesliga".

The most important key figures provide you with a compact summary of the topic of "Bundesliga" and take you straight to the corresponding statistics.

Soccer in the U.S. 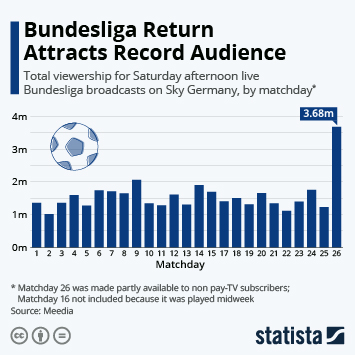