Published by
Christina Gough,
Oct 21, 2021
eSports refers to organized video gaming events or tournaments that culminate in championships at regional and international level, in which professional and amateur players compete against one another. The rapidly growing phenomenon surrounding eSports (electronic sports) continues to gather steam, as the intersection of gaming and sports offers an innovative wave of branding opportunities, engaging content and activations for millions across the world.

eSports audiences around the world

The easy accessibility of eSports is bound to attract more and more audiences in the coming years. In 2019, the number of eSports enthusiasts and occasional viewers totaled just under 400 million. At the current growth rate, by 2024, there are expected to be over 285 million frequent viewers of eSports worldwide, as well as some 291.6 million occasional viewers. Some of the most popular games among eSports players and fans include battle royale titles such as Fortnite and Call of Duty: Warzone.

Money to be made in eSports tournaments

Given the immense popularity of games such as these across the world, official eSports tournaments are able to offer huge jackpots for the best players in the world. The cumulative prize pool for global Counter-Strike: Global Offensive tournaments in the first half of 2021 stood at almost almost eight million U.S. dollars, with total eSports prize pools projected to grow even further in the coming years.

As a result of the increasing money in the market, the top players in the world are able to make a living from video games, something which would have been almost unthinkable in past decades. Among the leading players worldwide is Johan Sundstein from Denmark, also known as N0tail, who has racked up earnings into the millions of U.S. dollars thanks to his success playing online battle arena game, Dota 2. In a market that is very male-dominated, female eSports players still earn considerably less, with Sasha Hostyn, known as Scarlett, having recorded the highest earnings out of any female eSports gamer. All in all, with the constantly growing eSports market, the earnings are bound to grow and attract masses of new, skilled players.

The impact of COVID-19 on eSports

While many industries suffered greatly under the strain of the global pandemic, eSports was one of the few that was able to flourish. With professionals sports leagues around the world postponed or cancelled, many viewers turned online to get their competitive fix. The positive impact of the pandemic on eSports was confirmed in a 2020 survey of industry professionals, in which almost three-quarters stated that the level of investment and deal activity in eSports would increase as a result of the health crisis. Indeed, the level of interest in eSports has increased across the board, with younger fans in particular claiming that their interest in eSports had increased since the start of the pandemic.

In the following 5 chapters, you will quickly find the 38 most important statistics relating to "eSports market ".

The most important key figures provide you with a compact summary of the topic of "eSports market " and take you straight to the corresponding statistics. 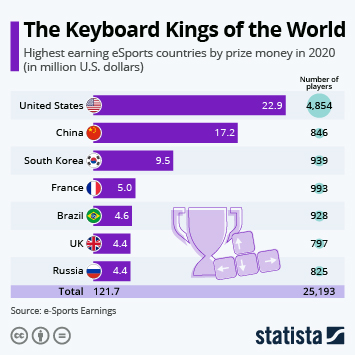 The Keyboard Kings of the World 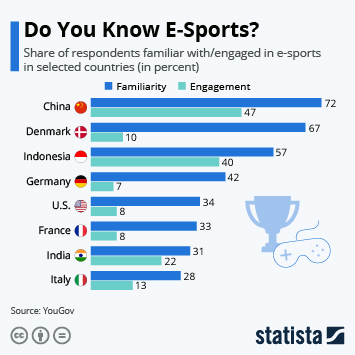 Do You Know E-Sports?