Published by Statista Research Department, Jun 20, 2022
The unemployment rate of the European Union was 6.2 percent in April 2022, meaning that as of this month, there were approximately 13.26 million unemployed people in the EU. Unemployment was highest in Spain, at 13.3 percent, and lowest in Czechia, at 2.4 percent. Youth unemployment during this month was 13.9 percent, meaning that around 2.6 million people under 25 were unemployed in the EU. The youth unemployment rate was highest in Greece, where approximately 36.8 percent of those under 25 were unemployed.

Europe's current level of unemployment is low by historical standards. For example, in the first half of the 2010s, the unemployment rate was almost always in double figures, peaking in 2013 at 11.7 percent. From this peak, unemployment gradually declined to a rate of 6.5 percent just before the start of the COVID-19 pandemic. The societal lockdowns that followed in the wake of the virus caused the EU unemployment rate to increase rapidly in 2020. Due to economic aid from governments and the EU to some of the worst hit countries. The utilization of furlough schemes was an important factor in keeping the damage to the labor market at a minimum, and as a result, unemployment began to fall again from Fall 2020 onwards. The strong labor market looks set to continue during 2022, with the high job vacancy rate of the first quarter of that year suggesting employers are looking to hire even more staff. Among EU member states, Czechia had the highest job vacancy rate in this quarter at 5.9 percent, with Greece having the lowest at 0.8 percent.

Comparisons with the UK and U.S.

The low levels of unemployment experienced by the EU have also been replicated in other parts of the world. In the United Kingdom, the unemployment rate in April 2022 was 3.8 percent, the lowest unemployment rate since the 1970s. Similarly, in the United States, the unemployment rate for May 2022 was just 3.6 percent. In both countries, employers are experiencing staff shortages, with job vacancies in the UK reaching a record level of 1.3 million in May 2022. This was also mirrored in the U.S., where job openings are outpacing the number of jobless people. This was particularly true in the leisure and hospitality sector, where 1 in 10 positions were unfilled as of September 2021.

In the following 5 chapters, you will quickly find the 35 most important statistics relating to "Unemployment in Europe".

The most important key figures provide you with a compact summary of the topic of "Unemployment in Europe" and take you straight to the corresponding statistics. 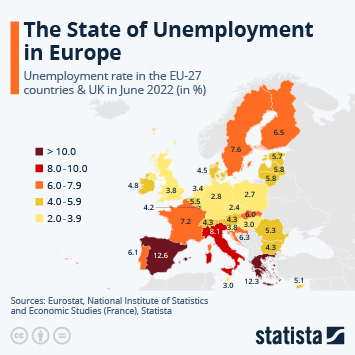 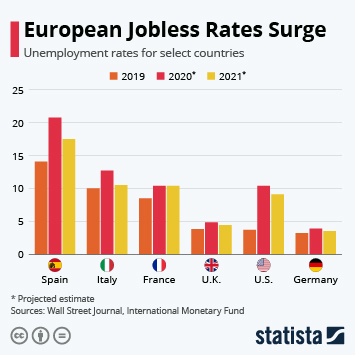