In 2020, the combined gross domestic product (GDP) of the European Union was just over 13.3 trillion euros. Europe's share of global GDP in this year was just under 15 percent, with this share expected to fall to 13.99 percent by 2026. Europe's declining share of the worldwide economy is a long-term trend and related to European economies growing at a slower pace than in other parts of the world, such as in Asia, and in particular, China. With a GDP of over 3.3 trillion euros, Germany has the largest economy in Europe, with France and the United Kingdom have the second and third-largest economies, respectively. None of these three country's economies grew at all in 2020, however, with almost all European nations seeing negative growth rates in 2020 due to the Coronavirus pandemic. Nevertheless, growth is expected to return in 2021 according to GDP forecasts, with an average growth rate across the European Union of 4.2 percent anticipated.

The hit to European economies inflicted by the COVID-19 was also reflected in the Labor Market, with the unemployment rate reaching 7.7 percent in European Union in early 2021. By late 2021, the unemployment rate for the whole EU fell back to 6.5 percent, and among European countries currently varies from 14.1 percent in Spain to just 2.2 percent in Poland. In terms of Europe's largest economies, Germany has consistently had a low unemployment rate, with the highest rate since 2000 being just 2.8 percent in 2008. By comparison, unemployment in Spain reached 23.1 percent in 2013 and was consistently above 20 percent between 2011 and 2015. Although the pandemic's threat to the labor market has receded somewhat, the rapid opening up of the European economy, coupled with rising energy costs and supply chain issues has caused prices across the continent to rise. The EU recorded a record high inflation rate of 5.3 percent in December 2021, driven by rising transport, housing and energy costs. As of December 2021 the country with the highest inflation rate in the EU was Estonia at 12 percent, with Malta having the lowest rate of 2.6 percent. Historically, the inflation rate of large European economies has followed a broadly similar pattern, with the widespread adoption of monetarist policies since the 1980s driving down inflation rates by the 1990s.

Like any market economy, private business enterprises are crucial to generating growth and creating jobs. In Europe, the company with the highest global revenue in 2021 was the the German carmaker Volkswagen, at over 253.97 billion U.S. dollars. The company with the second-highest global revenue was the British oil and gas company BP. In 2020, Volkswagen was also Europe's largest global employer at over 671 thousand employees worldwide. While large companies such as these are vital to Europe, there are far more small and medium-sized enterprises (SMEs) in the economy. In 2021, there were approximately 22.6 million SMEs in the European Union, which added 3.5 trillion euros to the European economy and employed over 83.8 million people. As for which country has Europe's best business environment, Denmark recently had the highest Ease of Doing Business (EODB) index score, indicating that it had the best regulatory conditions for private enterprise in Europe. In terms of corporation tax rates, Hungary had the lowest rate in the EU, at nine percent in 2021.
This text provides general information. Statista assumes no liability for the information given being complete or correct. Due to varying update cycles, statistics can display more up-to-date data than referenced in the text.
Published by D. Clark, Nov 22, 2022

Unemployment rate in the EU 2022, by country 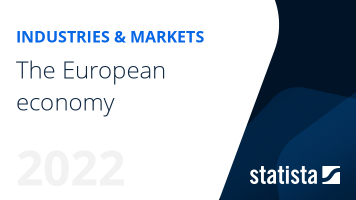 The most important key figures provide you with a compact summary of the topic of "Economy of Europe" and take you straight to the corresponding statistics.