The Brooklyn Nets are a professional basketball team that competes in the National Basketball Association's Eastern Conference Atlantic Division. The franchise was established in New Jersey in 1967 as the New Jersey Americans, before adopting the name New York Nets when it moved to Long Island in 1968. The team returned to New Jersey in 1977 and moved back to New York in 2012, where the team is currently located in the New York City borough of Brooklyn.
The Nets play their home games at Barclays Center in Brooklyn. During the 2019/20 NBA season, the average regular season home attendance for a Nets game was 16,403 per game and total attendance for that season amounted to 524,907. The Nets generated around 304 million U.S. dollars in revenue in the 2018/19 season. During that same season, the operating income of the Brooklyn Nets was 42 million U.S. dollars and as of 2020, the team’s franchise value stood at approximately 2.5 billion U.S. dollars. In 2019, the franchise was purchased by Canadian billionaire Joe Tsai for 2.35 billion U.S. dollars, the highest sum ever paid for a sports franchise in the United States.

The Nets have only appeared in two NBA finals in their history, losing to the Los Angeles Lakers in 2002 and the San Antonio Spurs in 2003. The team has a combined total of about 3.83 million fans and followers on Facebook and Twitter.
This text provides general information. Statista assumes no liability for the information given being complete or correct. Due to varying update cycles, statistics can display more up-to-date data than referenced in the text.

Christina Gough
Research expert covering sports and video gaming
Get in touch with us now
Published by Christina Gough, Jun 25, 2021 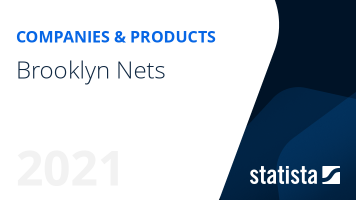 The most important key figures provide you with a compact summary of the topic of "Brooklyn Nets" and take you straight to the corresponding statistics.