Direct selling is a business model in which a company utilizes person-to-person interactions to sell products. Typically, the process involves an independent seller buying the goods from the parent company and then selling them to other individuals (single-level marketing), sometimes recruiting them to also become independent sellers (multi-level marketing). This business practice takes place across the globe, but is especially common and successful in the Americas and the Asia Pacific region. And although many legitimate companies and representatives around the world operate in this manner, direct selling is sometimes confused with or deemed controversial due to “pyramid schemes”, as certain major multi-level marketing (MLM) companies have been accused of forming such illegitimate business models. A pyramid scheme is an unsustainable business model in which sellers receive money for recruiting other sellers, who must then also recruit their own sellers in order to turn a profit, creating a business structure that resembles a pyramid, frequently without a genuine product to sell.

Globally, there are many direct selling companies specializing in numerous areas and providing various products from wellness supplements and cosmetics to household and home improvement items. Together, they generated some 186 billion U.S. dollars' worth of annual global retail sales in 2021, which is an increase compared to one year earlier. Direct selling companies specializing in wellness products make up over a third of the industry’s total sales, making it the largest direct selling product category. In the United States, the world’s largest direct selling market, the industry had seen a slight decline in retail sales in the last couple years, until 2020, when the country’s yearly direct sales had reached 40 billion U.S. dollars. In 2021, U.S. sales amounted to nearly 43 billion U.S. dollars. Furthermore, the size of the U.S. direct selling community, i.e., sellers and customers, had grown exponentially, amounting to more than 50 million people that year.

Some of the world's largest multi-level marketing and direct selling enterprises include the likes of eXp Realty, Natura &Co, COWAY, Nu Skin Enterprises, PM-International, among others. The top direct selling companies in the United States are Amway and Herbalife. The largest of the two, Amway, generated nearly nine billion U.S. dollars in 2021 and offers a broad range of products, with nutritional items, cosmetics, and home goods accounting making up the vast majority of the company's sales. The second-largest company,

D. Tighe
Research expert covering shopping behavior, sports and leisure retail, and the subscriptions and direct selling industry
Get in touch with us now
Published by D. Tighe, Aug 4, 2022

Size of the direct selling community in Europe
15.7m

Size of the global direct selling community 2013-2021, by region

Direct Selling in the United States

Direct selling in other regions 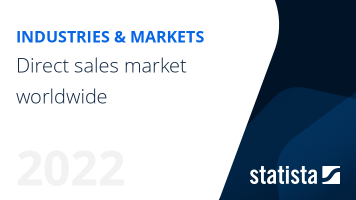 The most important key figures provide you with a compact summary of the topic of "Direct Selling Market" and take you straight to the corresponding statistics.