Among a population of more than 11 million people, 65 percent of Belgian consumers claimed to be active social media users. A ranking of how many users in Belgium use each individual social media platform does not exist, however. This is because there is not a lot of data available on social media in Belgium, something that is acknowledged by domestic sources. One possible reason for this is the structure of the country: Belgian has six different governments. Three governments exist for the regions (Flanders, Wallonia and the Brussels-Capital Region), there are governments for the French-speaking Community and the German-speaking Community and, finally, one national government. These internal differences in language and, sometimes, rules make it difficult to conduct the national surveys necessary to gather data on a topic like social media use in the country. In short, in Belgium it is sometimes more likely that numbers might exist on a regional than on a national level. Sources do seem to agree that one social media platform reigns supreme in the country: Facebook.
In 2020, it was estimated that there were around 1.7 million Facebook users in Belgium that were between 25 to 35 years old. Compared to other European countries, the Silicon Valley platform had comparatively many users amongst the Belgian population. This includes Generation Z: 82 percent of teenagers from Flanders (the Dutch-speaking region of the country) said in 2018 that they used the Facebook app at least once in the past month, making it their most popular smartphone app. As this survey was only held in Flanders, there is no data to compare this with Wallonia (the French-speaking region) or the Brussels-Capital Region. It is unclear whether Facebook is popular in Belgium due to Facebook Messenger, or whether it is the other way around. Nonetheless, Facebook Messenger is the most frequently used IM app in Belgium. 44 percent of Belgian respondents indicated in a 2017 survey they used the app for daily communication purposes, outscoring WhatsApp, Snapchat, iMessage and Skype. On a daily basis, the messenger app was used the most by 19- to 24-year-olds.

Over 3.6 million Belgians used Instagram in 2020, most of which were likely to be between 19 and 24 years old. As of the end of 2019, the share of active Instagram users made up 30 percent of the total population in Belgium. This penetration rate was slightly below neighboring countries Luxembourg and the Netherlands, however. In the Netherlands, roughly 37 percent of the population actively used the social media platform, whereas in Luxembourg the penetration rate was around 31 percent. In December 2019, singer-songwriter Angèle had the most followers of all Belgian influencers on Instagram. The musician had several hit songs in 2018, including number one hit Tout Oublier in Belgium and France with her brother Romeo Elvis.
This text provides general information. Statista assumes no liability for the information given being complete or correct. Due to varying update cycles, statistics can display more up-to-date data than referenced in the text.
Published by S. Dixon, Feb 8, 2022

Most popular social media platforms (how many people) 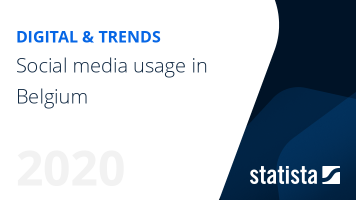 The most important key figures provide you with a compact summary of the topic of "Social media in Belgium" and take you straight to the corresponding statistics.