Central America is home to a nascent but fast-growing startup scene. As of June 2021, almost 900 private companies made up the Central American startup ecosystem, with the largest quantity of them based in Costa Rica. Commonly associated with violent crime and migration crises, what is less known is that the isthmus comprehended between Guatemala and Panama holds great potential for entrepreneurism. Central America is among the regions with the highest rates of entrepreneurship in the world. In 2020, more than 16 percent of adults in Guatemala and nearly 10 percent in Panama managed or owned a new business. Honduras and Nicaragua are also some of the Latin American countries with the highest percentage of self-employed workers.

It is said that Costa Rica owes its name to Christopher Columbus who, impressed by the gold ornaments worn by the natives, baptized it as a “rich coast” at the time of conquest. This also holds true for the country’s recent history. In May 2021, the club of rich countries that form the OECD opened its doors to Costa Rica as their latest member. In the startup world, Costa Rica is home to the most thriving group of startups in Central America, composed of at least 98 companies. Telecommunications, computer programming, and education make up for the largest startup segments in the country. Decentral games, a virtual casino based on the Metaverse and Blockchain technologies, is one of the most notable examples of Costa Rican startup success.

Panama: from banking to fintech hub?

Worldwide (and sometimes, infamously) known for its banking industry, Panama shows great potential for fintech development. One reason is that over two million Panamanian consumers used digital payment services in 2021, nearly half of its population. In 2019, with at least 14 fintech initiatives, Panama had the largest fintech offer in Central America. Crypto-banking platform Aurora Labs, for instance, makes the cut among Panama's best funded startups.

Surrounded by larger neighbors Guatemala, Honduras, and Nicaragua, El Salvador is doing surprisingly well in the startup scene. Founded in 1972, Banco Cuscatlán has ventured into digital banking and turned into one of the most successful Central American companies at raising capital, accumulating investments for 37.5 million dollars as of June 2021. San Salvador-based hugo is a food delivery and transportation app that has caught quite the buzz in the region, gathering 13.7 million dollars in investments and servicing almost one million users.
This text provides general information. Statista assumes no liability for the information given being complete or correct. Due to varying update cycles, statistics can display more up-to-date data than referenced in the text.
Published by Statista Research Department, Jan 7, 2022

Number of startups in Central America 2021, by type

Number of startups in Central America 2021, by country 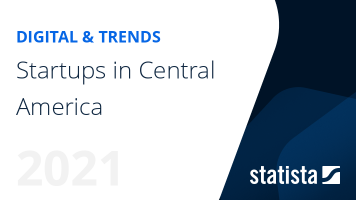 The most important key figures provide you with a compact summary of the topic of "Startups in Central America" and take you straight to the corresponding statistics.