The burning of fossil fuels for electricity generation releases huge volumes of planet-heating gases, such as carbon dioxide (CO2), into the atmosphere every year. As of 2021, the United States was the second-largest contributor to global electric power emissions, behind only China, having emitted 1.6 billion metric tons of CO2 (GtCO2). The power sector is a major source of GHG emissions in the U.S., accounting for 25 percent of the country’s total emissions in 2020. Additionally, U.S. power plants are also responsible for a large portion of toxic air pollutants such as sulfur dioxide and mercury, which are harmful to human health.

CO2 emissions from electricity generation in the U.S. increased seven percent in 2021, compared with the previous year. This significant growth was a result of the U.S. emerging from COVID-19-related lockdowns and restrictions imposed throughout 2020 and was the largest annual increase since 2010 (the year after the global financial crisis). Nevertheless, U.S. power sector emissions in 2021 were the second lowest they have been for nearly four decades. Between 1975 and 2005, annual emissions from electricity generation almost doubled to 2.4 GtCO2, but they have fallen by almost 40 percent since then. These substantial reductions saw the electric power sector drop below the transportation sector as the most polluting sector in the U.S. in 2016.

Why have electric power emissions fallen in the U.S.?

While there is no single cause for the significant emission reductions within the electric power sector, the shift away from coal toward cleaner energy sources has certainly played a key role. Coal-fired electricity generation halved between 2005 and 2021, causing CO2 emissions from coal power to fall from 1,983 MtCO2 to 908 MtCO2. During this time, electricity generation from natural gas rose to become the leading source of electricity in the U.S. Although natural gas is not a zero-carbon fuel, it releases roughly half the CO2 of coal when combusted. This, along with the increased use of wind power, has helped cut U.S. power sector emissions greatly.

While the U.S. has made substantial progress in cutting power sector emissions, there is still more to be done. Thus, President Biden pledged to prioritize climate action and achieve 100 percent carbon-free electricity by 2035. However, there are fears this target will not be achieved after the U.S. supreme court ruling on the West Virginia vs. EPA case, which centers on the 2015 Clean Power Plan (CPP). The CPP set national limits on carbon pollution from power plants, but the result of the ruling will limit the EPA’s power to regulate emissions from fossil fuel-fired power plants. West Virginia is a leading coal producer and has the highest power sector carbon intensity in the U.S., at 1,932 pounds of CO2 per megawatt. It is also home to some of the most polluting power plants in the U.S., such as the John E. Amos coal-fired power plant, which emitted some 13 million tons of CO2 in 2021.
This text provides general information. Statista assumes no liability for the information given being complete or correct. Due to varying update cycles, statistics can display more up-to-date data than referenced in the text.
Published by Ian Tiseo, Jul 14, 2022

Breakdown of GHG emissions in the U.S. 2020, by sector

Emissions from electricity generation in the U.S.
1.57 GtCO2

Breakdown of GHG emissions in the U.S. 2020, by sector 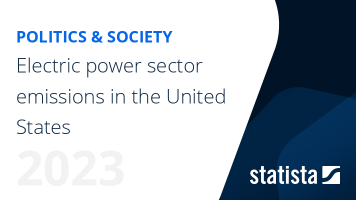 The most important key figures provide you with a compact summary of the topic of "Electric power emissions in the U.S." and take you straight to the corresponding statistics.