Australians are reducing their meat consumption

The Australian market appears to be fertile ground for an expanding plant-based food alternative market. Per capita meat consumption has been dropping in recent years and OECD projections suggest that consumption will continue a gradual decline, with the exception of poultry. While poultry consumption is forecast to increase year on year, it is not likely that its rate of increase will be enough to replace the consumption of other meats. To fill this void, optimistic forecasts from the Australian vegan food think tank, Food Frontier, suggest that the plant-based meat sector could export as much as 1.4 billion Australian dollars’ worth of plant-based meat by 2030. In comparison, Australia’s livestock export industry was worth over 25 billion Australian dollars in 2020.

Vegetarian and vegan foods are undoubtedly making their way into the Australian mainstream with more people identifying as vegan, vegetarian, or flexitarian. Furthermore, a growing number of restaurants and fast-food outlets are adding vegan options to their menu, which means that vegan food is more accessible than ever. Lord of the Fries, a fast-food chain founded in Melbourne, has an all-vegan menu and Hungry Jacks, Pie Face, and even 7-Eleven are now producing vegan versions of burgers and meat pies. Despite this increasing popularity and availability, the comparative price of plant-based foods tends to be significantly higher. Most plant-based alternative products can cost 50 percent or more than their animal-product counterparts; this price difference is likely to be the next major hurdle for the industry’s expansion into the mainstream.

In the following 5 chapters, you will quickly find the 30 most important statistics relating to "Plant-based food in Australia". 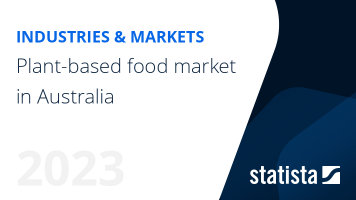 The most important key figures provide you with a compact summary of the topic of "Plant-based food in Australia" and take you straight to the corresponding statistics.

Water supply and consumption in Australia