Published by
José Gabriel Navarro,
Nov 28, 2022
Getting informed in Latin America tends to be challenging for consumers yet promising for newsmakers. It can be arduous because, according to a 2022 survey, false or misleading news stories were seen more often in the region than in the rest of the world. Namely, Latin Americans struggled the most to find reliable data on politics, the pandemic, and even products. The subcontinent is also home to some of the markets with the most adults using social media as a news source. Approximately two-thirds of the people interviewed in Argentina, Brazil, Chile, and Mexico in early 2022 included platforms like Facebook, YouTube, and WhatsApp in their media diet. However, there are also consumers in the region willing to spend money on what they consider sources of good quality information. In Brazil and Mexico – the largest Latin American economies – about one in five internet users surveyed in 2022 said they had paid for digital news.

A study conducted annually among Brazilian internet users suggests that, in recent years, more than half of them read news online. As of March 2022, the share stood at 54 percent. But they also seem to prefer legacy media titles that entered the web environment, as opposed to enterprises created exclusively for the online mediascape. At the end of 2021, the five most popular independent news websites in Brazil had between 1.3 million and 5.4 million unique visitors. Meanwhile, the online versions of print diaries like O Tempo, Correio Braziliense, Valor Econômico, Folha de S. Paulo, and O Globo had between 7.7 million and 29 million unique visitors. That makes them the most visited Brazilian newspaper websites, even though three of the leading sites have paywalls hindering unregistered and unpaying users from viewing multiple stories.

Television reigns supreme among the leading offline news brands in Mexico. A 2022 survey showed that over one-third of responding internet users checked the news on TV Azteca and/or on Televisa, the country's top free TV channels, at least once a week. While the ratings confirm the preference for Azteca, they also indicate a fondness for Las Estrellas, run by TelevisaUnivision. During a single week in mid-2022, the two channels encompassed all of Mexico's most-viewed TV programs. Internet users, on the other hand, tended to seek information in platforms derived from print newspapers. The most visited Mexican news websites in early 2022 were Milenio and El Heraldo de México, two diaries founded about half a century ago.

In the following 8 chapters, you will quickly find the 47 most important statistics relating to "News consumption Latin America". 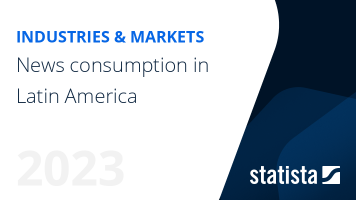 The most important key figures provide you with a compact summary of the topic of "News consumption Latin America" and take you straight to the corresponding statistics.