DISH Network Corporation (Dish) is an established satellite television provider, servicing the North American market. Dish acquired Boost Mobile from the Sprint Corporation (Sprint) during the third quarter of 2020, as part of the merger of Sprint and T-Mobile US. As a result, Dish is now also one of the largest wireless communications providers in the United States. Dish will operate as a mobile virtual network operator (MVNO) for seven years under the terms of the deal, using T-Mobile US infrastructure while they build their own network. Dish has been able to generate revenue from Boost Mobile immediately, although subscriber numbers have decreased since the time of acquisition.

The transition to wireless operator comes as the subscriber base of Dish’s satellite TV business continues to shrink. The company’s streaming service – Sling TV – also saw a slight drop in subscribers in early 2022. Dish is not alone in experiencing this decline, with the share of households in the United States with a pay TV subscription falling significantly from 2015 to 2021. By establishing a wireless business, Dish gain exposure to the growing market of 5G services and reduces the dependence on pay TV.

While Dish’s early wireless activities have been successful, a decision by T-Mobile US to shut down their 2G and 3G (CDMA) service earlier than expected has thrown a spanner in the works. Many Boost Mobile customers used handsets that rely on this technology, and the company is now promoting targeted schemes to provide consumers with wireless devices compatible with modern networks. However, the shortage of wireless devices poses a challenge to this plan.

Moving ahead with 5G

Dish’s ambitions go beyond simply operating as an MVNO. The company’s aim is to offer 5G services in the U.S. through their own 5G network, in line with commitments made to the Federal Communications Commission (FCC) in the merger deal. Under the terms of the deal, Dish committed to deploy a 5G network that covers 20 percent of the United States population by June 2022, and 70 percent of the population by June 2023. The company achieved its first milestone and has been providing 5G services in about 120 cities since June 2022, with Las Vegas being the first city where its services were made available.
This text provides general information. Statista assumes no liability for the information given being complete or correct. Due to varying update cycles, statistics can display more up-to-date data than referenced in the text.
Published by Statista Research Department, Sep 27, 2022 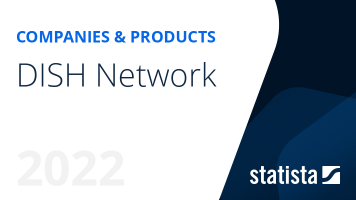 The most important key figures provide you with a compact summary of the topic of "Dish Network" and take you straight to the corresponding statistics.