Published by L. Ceci, Mar 23, 2022
Learning a new language has increasingly been disassociated from physical classrooms, teachers, and most importantly books. Since the introduction of language teaching software, like Rosetta Stone’s first CD-ROM collections in the mid-90s, developers have been adapting their products to fit the newest media available and meet consumers’ expectations.
A good number of language learning apps were developed at first as websites, only to evolve to their mobile-first format after apps rose in popularity. Currently, mobile apps are one of the default formats that learners expect to have available when deciding to study a language online.

In 2020, the global mobile e-learning market was estimated to amount to approximately 1.84 billion U.S. dollars. During that year, the impact of the 2020 coronavirus pandemic contributed to driving the unprecedented growth in e-learning and language learning apps usage.

Between 2020 and 2021, the popularity of language learning apps increased due to users’ desire to engage in meaningful activities while sheltering at home during the pandemic. While back-to-school and pre-holiday months had usually registered higher peaks of users’ engagement, the pandemic presented a unique scenario that encompassed language learning apps’ seasonality. In 2021, with vaccination plans rolling out and a number of countries partially lifting travel restrictions, the summer holidays provided the opportunity for language learning apps to maintain their acquired popularity among users. In February 2022, the leading language learning mobile apps generated almost 27 million U.S. dollars in in-app purchase revenues from users worldwide, with market leader Duolingo accounting for half of the total, with 13.38 million U.S. dollars in revenues generated during the examined month.

While the Berlin-based Babbel had previously announced the possibility of participating in the 2021’s IPO wave, the company has since discarded its plans to go public in the immediate future. Babbel, which first launched in 2008 as a website, generated approximately 147 million euros in revenues in 2020.

Despite the limited share of Duolingo users who choose to pay for advanced features on the app, 72 percent of the company’s 2021 revenues were generated by subscription plans. Duolingo makes use of a highly gamified environment in which language acquisition is presented as a progressive climb to a final prize. Duolingo adopts a freemium monetization strategy, leaving users with the possibility to interact with many basic functionalities on the app while also offering paid subscriptions and in-app purchases.

By comparison, Babbel positions itself as a more traditional digital language course, with conventional dialogues and exercises focused specifically on grammar. While the platform provides a free trial period, Babbel's monetization method focuses on selling long-term subscription plans to users, as well as limiting in-app advertising to maximize users' experience.

As of the third quarter of 2021, online educational videos saw a reach of 30 percent among internet users worldwide, with audiences becoming more and more accustomed to this learning format in recent years. In the case of language learning apps, video features can keep users engaged, as well as improve the overall learning experience. Memrise, which launched in 2010, was among the first language learning programs to introduce in-app videos: in 2016 the app started integrating real-life videos from native speakers into its language courses, seeing an increase in downloads by more than 66 percent the following year. More recently, the South Korean app Cake launched as a video-first language app, offering excerpts from popular films and TV shows with useful English language examples. Similarly, the Singapore-developed EWA taps into several media formats including videos to help users learn English or Spanish.

The most important key figures provide you with a compact summary of the topic of "Language learning apps" and take you straight to the corresponding statistics. 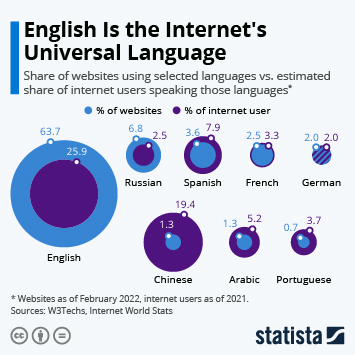 Languages on the internet