Despite experiencing setbacks in 2020 due to the coronavirus (COVID-19) pandemic, the retail industry in the United Kingdom (UK) recovered in 2021, continuing the consistent growth that's been seen for more than a decade. With a gross value added (GVA) of over 89 billion British pounds in 2020, the retail sector is an important contributor to the UK economic landscape. In addition to the monetary value it generates, retail trade in the UK employs an average of three million people across more than 200 thousand enterprises.

Supermarkets: champions of the sector

Non-specialized food stores (e.g., supermarkets) take up the lion’s share of the retail landscape in the UK. Predominantly food stores enjoyed an average annual sales volume above the 150 billion British pound mark for the last 15 years. While the pandemic caused a notable drop in the sales of food stores in 2020, the sector recovered in 2021 and saw over 176 billion British pounds in retail sales in that year. This was just short of 2019's record number over the measured period of time. Considering the predominant role supermarkets play in the UK retail sector, it should not come as a surprise that the top three retailers in the country are supermarket giants. Tesco sits at the top of that list, with 30 billion more in sales value than Amazon UK.

Throughout 2020, COVID-19 containment measures and several lockdowns forced brick-and-mortar stores to close down. While this did not stop consumers from shopping, it did make them turn to online channels at unprecedented levels. This trend continued into 2021, as online retail sales in the UK grew by a further 12 billion British pounds and nearly reached 120 billion British pounds, representing an increase of about 10 percent compared to the previous year. Before the pandemic, internet sales as a proportion of total UK retail hovered at around 20 percent. In January 2022, online sales share sat at around 27 percent of all retail sales in the UK.
This text provides general information. Statista assumes no liability for the information given being complete or correct. Due to varying update cycles, statistics can display more up-to-date data than referenced in the text.
P. Smith
Research expert covering apparel industry and general merchandise
Get in touch with us now
Published by P. Smith, Sep 13, 2022

Value of annual retail sales in the UK
465.25bn GBP

Leading retailer in the UK
Tesco 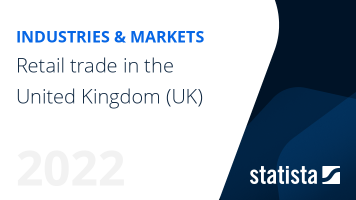 The most important key figures provide you with a compact summary of the topic of "Retail trade in the UK" and take you straight to the corresponding statistics.