Sainsbury’s, or J. Sainsbury plc, takes its name from John James Sainsbury and Mary Ann Sainsbury, who opened the first Sainsbury’s store in London in 1869. Sainsbury’s grew and grew, far beyond a London dairy shop, adding more innovations, stores and product lines. In the late 20th century, Sainsbury’s truly became a national retailer, opening stores in the North of England, in Scotland, Wales, and Northern Ireland. In 1973 it was listed on the stock exchange, which at the time was the largest ever stock market flotation. For a few decades Sainsbury’s was the largest supermarket group in the UK.

Sainsbury’s still ranks among the biggest UK supermarkets; however, it has lost the top spot to Tesco, which commands the largest market share. Sainsbury’s has been in a battle with Asda over recent years for second place. The same competitors are challenging in the online grocery shop market, along with the more recent contender, Amazon. Sainsbury’s size is also shown by the fact that it is in the top five companies based in the United Kingdom with the most employees worldwide, again behind Tesco.

Sainsbury’s is still best known for its groceries. It has a range of own-brand products, from the value ranges to the higher end ‘taste the difference’. These products can be found in a range of stores, from convenience stores, branded as ‘Sainsbury’s local’ to huge supermarkets, where you can buy everything from video games to clothes. Their presence is not only apparent in physical stores. In fact, Sainsbury’s ranks in the top 5 online stores for both groceries and footwear, demonstrating the brand’s range. Sainsbury’s sales revenue has remained fairly constant since 2017, and reached a new high of over 33.3 billion British pounds in 2022.

Argos became part of the Sainsbury’s group after a 1.4 billion-pound takeover in 2016. Argos sells products across numerous categories, the most popular being the toys, hobbies and DIY category. Over the years, many Argos stores have been relocated inside Sainsbury’s branches. Argos is yet another example of the increased popularity in online shopping, with e-commerce net sales greatly increasing during 2020.
This text provides general information. Statista assumes no liability for the information given being complete or correct. Due to varying update cycles, statistics can display more up-to-date data than referenced in the text.
Published by Emma Bedford, Jul 4, 2022 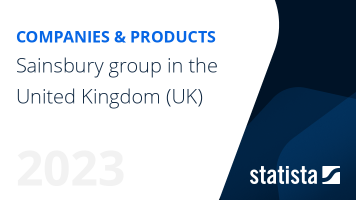