Published by Emma Bedford, Oct 10, 2022
Tesco PLC is a British grocery and general merchandise retailer that operates internationally with headquarters in Hertfordshire, England. Not only is Tesco one of the most valuable brands in the United Kingdom, but it is also the sixteenth most valuable retail brand worldwide as of 2021. In the United Kingdom, Tesco is the leading grocery retailer with a consistent share of over 27 percent of the market and is classed as one of the 'big four' supermarkets along with Asda, Sainsbury's, and Morrisons.
Originally founded in 1919 by Jack Cohen, the group has more recently diversified both geographically and into other retail areas, such as books, clothing, electronics and toys, as well as financial service and telecoms and internet service subsidiaries. This expansion in the nineties saw Tesco reposition itself from a low-cost retailer to one that appeals to many social groups by offering a range of own-label selections, from 'Tesco Value' items to its 'Tesco Finest' range. It operates a number of different sized stores, with Tesco Extra at one end of the spectrum, which are larger supermarkets that stock nearly all of Tesco's product ranges and a large range of non-food goods, to 'One Stop' stores which act as small convenience stores. The number of stores operated by Tesco have increased year on year, with forecasts predicting continued growth in the number of outlets. Following the economic downturn, larger grocery retailers have lost share, while cheaper alternatives, discounters in particular, have found favor among the British public. As such, Tesco is finally experiencing a return to growth in sales as the economy recovers.

The group also exists internationally with wholly-owned grocery retail operations in nine countries, in addition to interests in a number of other businesses and joint ventures with local partners. In terms of the group's revenue, however, a large majority is concentrated in the United Kingdom and Republic of Ireland. Tesco has been a leader in technological adoption: it enabled the first ever recorded online shopping transaction from home in 1984 and, to this day, remains the leading online grocery retailer in the country. Since 2014, the e-commerce net sales of Tesco have increased significantly and reached over 10.8 million U.S. dollars in 2022.

In the following 4 chapters, you will quickly find the 25 most important statistics relating to "Tesco PLC".

Statistics on the topic
Tesco market share in Great Britain
26.9%
Number of Tesco stores worldwide
4752
Number of stores in the United Kingdom and Ireland
4,074 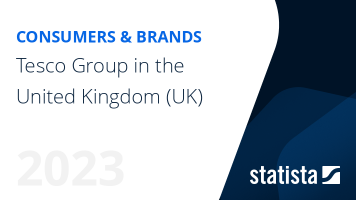 The most important key figures provide you with a compact summary of the topic of "Tesco PLC" and take you straight to the corresponding statistics.