Social media and children in the UK - Statistics & Facts

Social video network TikTok, which is very popular with younger social media users, was used on average 97 minutes per day by kids in the UK. Snapchat followed, with over half an hour being spent on the platform daily. Although TikTok influencers found their largest audience with women aged 18 to 24, the second-largest audience was girls aged 13 to 17. Over half of all UK children surveyed in 2021 said they had used TikTok more than once in the past few weeks. As of April 2022, Facebook had approximately 736 thousand users aged between 13 and 17 years.

The need for social media literacy

As social media companies grapple with unregulated content, fake accounts, and fake news, children’s online literacy is a beneficial tool with which younger users can protect themselves online. As of October 2021, a survey found that 90 percent of eight to 11-year-olds in the UK said they had been educated about internet safety by a parent. In addition, 77 percent of children in Northern Ireland said they were able to identify a fake online profile, and 63 percent of kids in England said the same.

In March 2021, 43 percent of children surveyed in the UK said they found it was quite difficult to tell whether a news story on social media was true, and one in ten said that it was very difficult to spot fake news. The same survey found that in order to check if a piece of online content was true or not, children said they looked at the comments section and thought about whether the person who had shared the story was someone that they trusted.

Good social media literacy enables children to avoid unwanted attention in online environments. As of 2020, 71 percent of girls aged 12 to 15 years in the UK who used social media reported having changed their social media privacy settings, and 65 percent of boys had done the same.

Kid’s opinions on being online

The COVID-19 pandemic further propelled many children into using online platforms as a means of socializing. As of October 2021, 69 percent of kids aged 8 to 17 years in the UK said they felt closer to friends due to being online and over half said it was good for their mental health.

Overall, using social media enables children in the UK to stay connected with friends and family. Online platforms also present chances to learn, play and be creative. Whilst major social media companies tackle existing issues, social media literacy is necessary for children enjoy online environments more safely. Having the skills to identify fake profiles, and increase personal online privacy, empowers children to safeguard themselves in a way that many online platforms cannot at present. Informing children of how to report online offenses is also a key element.

As algorithms design social media feeds to be unique to the user, it can be difficult to address harmful content seen by children, unless they themselves report it properly and timely to the platform, or to their parents or guardians. Digital literacy skills will become even more crucial as online platforms move towards integration with the metaverse, where abusive behavior becomes even more immersive.
This text provides general information. Statista assumes no liability for the information given being complete or correct. Due to varying update cycles, statistics can display more up-to-date data than referenced in the text.
Published by S. Dixon, Oct 18, 2022

Social media audiences in the United Kingdom (UK) 2021, by age and gender 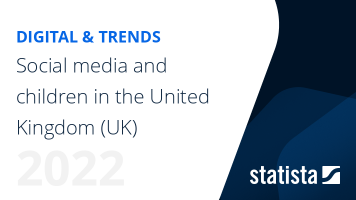 The most important key figures provide you with a compact summary of the topic of "Social media and children in the UK" and take you straight to the corresponding statistics.