40k
57k
41k
9.6k
Private security guards have become a common sight across our society, whether they're escorting cash in transit, patrolling shopping malls, conducting screening at airports or protecting VIPs. In many places, the guards dress like police officers and are equipped with firearms. Private security is booming and the sector is worth approximately $180 billion, a number that's expected to increase to $240 billion by 2020. That's greater than the GDPs of 100 countries including Portugal, Romania and Hungary. An estimated 20 million workers are employed in the private security sector while its biggest company, G4S, has 585,000 employees and revenues of nearly $10 billion.

When companies like Blackwater (now called Academi) flocked to Iraq more than a decade ago to fulfill lucrative contracts, the industry really started flourishing. However, increasing levels of wealth and growing global inequality have proven the real driving forces behind its inexorable rise. The global pool of super rich individuals is bigger than ever, resulting in heavy demand for services like alarm monitoring and armored transport. That demand isn't going to slacken anytime soon with the private security sector growing 6 percent every year. 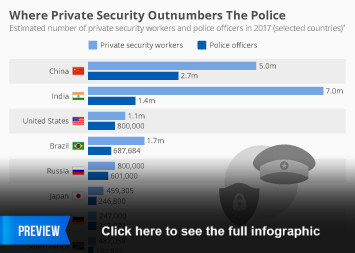 This chart shows the estimated number of private security workers and police officers in 2017.