88.9k
Social media has become vital to success in 21st century politics. Barack Obama and Donald Trump have something major in common: their social media strategies played a considerable role in their election victories. With the midterm elections just around the corner, social media is once again set to play a decisive part in shaping the American political landscape for years to come. Considering how high the stakes are online, The New York Times conducted an analysis of Facebook and Instagram interactions over the past 30 days to see which party is winning the social media battle ahead of the elections.

That involved over 53,000 posts and more than 1,100 accounts on both Facebook and Instagram in the 30 days up to October 15. Democrats were firmly in the lead in terms of likes, comments and shares on both networks during that period. Republicans are more successful on Facebook than Instagram but they still trail their Democrat opponents in terms of interactions. For example, Democratic Senate candidates had 10 million interactions compared to the GOP's 2.2 million. Democrats also came first for interactions among House candidates with 3.5 million vs 1.5 million for the Republicans. Things were tighter in the race for the country's governor positions and this time, the GOP had their noses slightly ahead.

When it comes to the situation on Instagram, Democrats also had the most interactions among candidates for governor and the Senate. Even though all of that social media domination may sound rosy for the Democrats, it is unlikely to result in a blue wave in November. The bulk of the interactions on both social networks happened on the pages of a handful of high-profile candidates, some of whom are running uncontested. For example, Bernie Sanders had 6 million interactions over those 30 days while Beto O'Rourke had 1.6 million and Elizabeth Warren had 940,000. Those three candidates accounted for 86 percent of all Facebook interactions among Senate candidates. 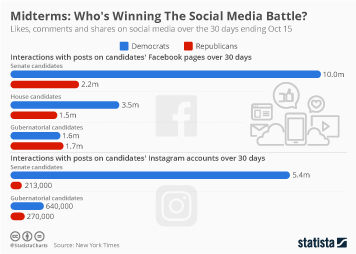 This chart shows likes, comments and shares on social media over the 30 days ending October 15.