Social media and politics in the United States - Statistics & Facts

Social media is a vital tool with which politicians can reach out to voters and constituents. Internet users spend more and more time getting their news and information on current events from digital platforms, as well as using them to voice their opinions. During the run-up to elections, such as the 2022 Midterm election to be held on November 8th, politicians depend on mainstream social media platforms, such as Facebook and Twitter, to communicate with the population, and hopefully sway votes in their favor.

Republican politicians posted more regularly on social media than Democrats in 2021. Republican and United States senator for Texas Ted Cruz was the most active member of the U.S. senate on Twitter, tweeting 4,351 times throughout the year. Additionally, Republican Billy Hagerty ranked second, with 3,154 tweets.

Republicans tweeted more often than Democrats, while Democrats used hashtags far more frequently. The most used hashtag by Republicans was #bidenbordercrisis, which was used a total of 2,779 times. The leading hashtag used by Democrat members of U.S. congress was #buildbackbetter which was used 9,513 times. Other popular hashtags used by Democrats were #americanrescueplan and #covid19.


Former President Barack Obama's Twitter account is the most followed profile on the platform, with over 131 million followers, demonstrating how entwined social media and politics are.

How much is spent on political digital advertising?

Regardless of the importance of digital ads, over two billion U.S. dollars were spent on broadcasting. Additionally, 388 million USD was invested in Google and Facebook campaigns.

In 2021, 35 percent of respondents in the U.S. said that social media made it easier for them to participate in politics, whilst 13 percent said it made it harder. Moreover, 37 percent of respondents said they had liked a post about politics on social media within the last 12 months, and one quarter said they followed a politician on social media. Less common online political activities carried out by social media users included sharing political information, online volunteering for politicians, and using political hashtags. Voters freely participating in politics on social media demonstrates the importance of digital campaigning for federal, state, and local elections.
This text provides general information. Statista assumes no liability for the information given being complete or correct. Due to varying update cycles, statistics can display more up-to-date data than referenced in the text.
Published by S. Dixon, Oct 28, 2022

Number of social media users in the United States
302m

Share of U.S. internet users who use social media to read news
26.2%

Leading news websites in the U.S. 2022, by monthly visits 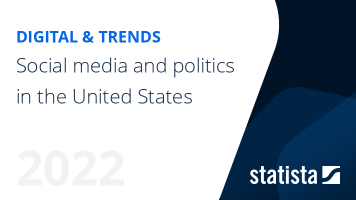 The most important key figures provide you with a compact summary of the topic of "Social media and politics in the United States" and take you straight to the corresponding statistics.