According to Voicebot.ai, Google Assistant’s unique applications totaled over 4,000 in January 2019. Looking at how Google Assistant has redirected resources towards building out its smart home features, they have come far. Just about two years ago, they only had around 165 unique Google actions that its Assistant could perform. Google still has quite the race to run to catch up to Amazon’s Alexa, which has over 56,000 unique actions that it can complete in the U.S.

Voicebot.ai used action and skills counts as a proxy for developer participation in each platform. While these might have mattered less if there was evidence that the over 56,000 actions Alexa can complete were barely used, that doesn’t seem to be the case. In addition, Amazon had over 5,000 actions for Alexa over the same 26-month period of time. 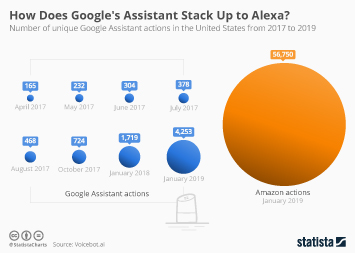 This chart shows the number of unique Google Assistant actions in the United States from 2017 to 2019.