Coming off the worst year on record for international travel, many had hoped that things could only get better in 2021 for the battered tourism industry. As it turns out, the situation went from bad to worse, however, at least when looking at international tourist arrivals in the first five months of the year.

Having dropped by more than one billion visitors or 73 percent in 2020, international tourist arrivals declined by 85 percent between January and May 2021 when compared to the same period of 2019. According to the UNWTO, tourism destinations around the world recorded 460 million fewer international arrivals in the first five months of 2021 compared to 2019. Even compared to 2020, when COVID-19’s crippling effect on international travel became apparent in March, arrivals declined by 65 percent, as travel restrictions remained in place in large parts of the world.

“Accelerating the pace of vaccination worldwide, working on effective coordination and communication on ever changing travel restrictions while advancing digital tools to facilitate mobility will be critical to rebuild trust in travel and restart tourism” UNWTO Secretary-General Zurab Pololikashvili said in a statement. And while international tourism began picking up in May and some travel restrictions were lifted over the Northern hemisphere’s summer season, the emergence of the Delta variant is clouding the outlook for the remainder of 2021.

As the following chart shows, Asia-Pacific, where travel restrictions have been particularly strict, has suffered the largest drop in international tourist arrivals this year at -95 percent. At the other end of the spectrum, the Americas have seen the smallest relative decline compared to 2019 at -72 percent. 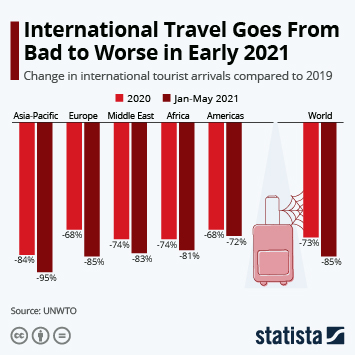 This chart shows the change in international tourist arrivals from January through May 2021 compared to the same period of 2019.