Demographic woes mean that South Korea will depend on immigration to maintain its working age population. Still, the notion keeps colliding with anti-immigrant and anti-Chinese sentiments in the country.

A draft law that would make it easier for the children of immigrants to gain South Korean citizenship has been meeting significant headwinds, from 300,000 signatures under a presidential petition to rude comments by the public in an online hearing of the proposal, especially targeted towards Chinese immigrants. According to CNN, out of the 3,930 people who would be eligible for citizenship under the new law, 3,725 are Chinese. The backlash happened despite the fact that many Chinese immigrants in the country are ethnic Koreans whose ancestors settled in China.

As seen in data from the U.N., foreign nationals of Chinese origin make up the biggest group of immigrants in South Korea by a large margin. In 2019, the statistic counted more than 620,000 Chinese citizens living in South Korea, up from just around 20,000 in 1990. This number is almost as high as in Japan despite the country’s much larger population. As a result, Chinese migrants make up more than half of all immigrants counted in South Korea, while their share was at 31 percent in Japan, followed by South Korea immigrants at 19 percent.

As many as 75 percent of Koreans have negative view of China, a Pew Research Center survey showed last year. This was compared to 86 percent in Japan. While unfavorable views of China rose around the world in 2020 due to the coronavirus pandemic and the country’s economic power being seen as a threat, the more recent negative sentiments mix with historical animosity in Korea and Japan. The large group of Chinese immigrants does not fare much better in Japan, which many view as an ethnonational society which is generally skeptical of immigrants and their naturalization. 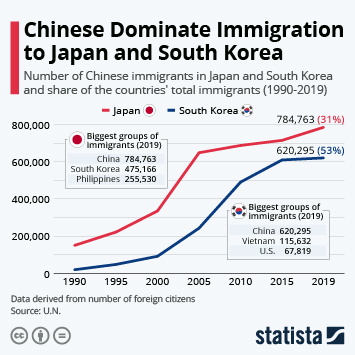 This chart shows the number of Chinese immigrants in Japan and South Korea and share of the countries' total immigrants (1990-2019).