нет войне – translated as “no war” or “no to war” - is the slogan that has been appearing on banners, in hashtags, chants and graffiti during Russian anti-war protests that commenced after the invasion of Ukraine by the country Thursday. Thousands of Russians took to the streets yesterday in several cities and were met with heavy police presence.

As of 2 p.m. CET on Monday, almost 6,000 protestors had been detained, monitoring group OVD-Info said. Most people were taken into police custody in Moscow and the surrounding oblasts, which are Russian administrative districts. Many of the arrested spent the night at police stations, according to the group.

Of the protesters taken into custody, more than 3,000 people were arrested in and around Russia’s capital, followed by around 2,000 arrests in the Northwestern region of the country, centering around St. Petersburg. The Volga region, including populous cities like Nizhny Novgorod, Saratov, Kazan, Ufa and Perm also saw more than 380 arrests, while in the Ural, 184 protesters were detained, many of them in Ekaterinburg and Chelyabinsk.

Arrests were fewer in Russia’s Eastern parts but reached as Novosibirsk in Siberia (73 arrests) and Vladivostok in the country’s Far East (9 arrests).

According to a 2021 survey by the independent Russian research group Levada Center, 43 percent of Russians are opposed to war in Ukraine. Almost half of Russian respondents said they somewhat or definitely disagreed with an involvement of Russia in Ukraine on the side of embattled regions Donetsk and Luhansk, which is how the invasion is repeatedly framed within Russia. Another 43 percent said they definitely or somewhat agreed with a military involvement in Ukraine, while 14 percent said they had no definite opinion. 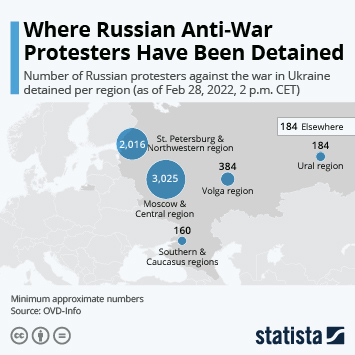 This chart shows the number of Russian protesters against the war in Ukraine detained per region (as of Feb 28, 2 p.m. CET) .