At the UN General Assembly yesterday, several nations which hadn't condemned the Russian invasion of Ukraine yet voted for a resolution that "deplored" Russia's aggression.

Five nations - Russia, Syria, North Korea, Eritrea and Belarus - voted against the resolution. Four more - Iran, Nicaragua, Venezuela and Cuba - did not vote or abstained, but have on their own published pro-Russian statements.

Few nations remained completely silent on the issue, for example secretive Turkmenistan, Ethiopia or energy-rich Azerbaijan, which has strong connections to both Russia and Ukraine.

While most countries in Europe and the Americas have now condemned the Russian invasion of Ukraine, the picture looks a bit more mixed in Asia and Africa. Many Asian countries – among them developing powers India and China – have been attempting the tight rope walk of remaining neutral in the current crisis. In Africa, several major economies on the continent - Nigeria, Egypt, Kenya and Ghana - moved to condemn the invasion, while others - among them Algeria, South Africa and Morocco - have not judged the crisis one way or the other.

China is a major ally of Russia and also one the country is banking on to keep its financial flows going. The country is the single-biggest foreign holder of Russian central bank reserves ahead of France, Japan and Germany. Unlike the latter countries, China has not declared that it will sanction Russia’s central bank or any other financial flows. Like many nations trying to remain neutral, China has praised diplomacy, but has denied calling Russia’s move an invasion outright.

Similarly, Indian Prime Minister Narendra Modi appealed to Putin to stop violence but has not named the country as an aggressor. India buys 70 percent of its arms from Russia, but also has close ties to the U.S., who want to establish the country as an alternative to China.

Both India and China abstained from the UN vote. 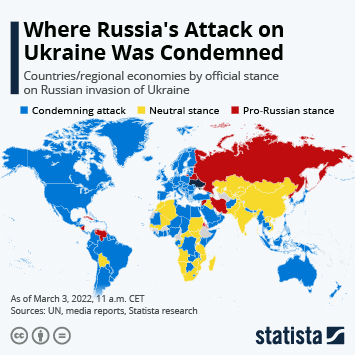 This chart shows countries/regional economies by official stance on Russian invasion of Ukraine.