The number of nightclubs in England, Scotland and Wales has dropped to its lowest in more than two decades, with one in five having closed over the past three years, according to the Night Time Industries Association (NTIA). Where 1,418 clubs were recorded as open in March 2020, this dropped to 1,130 in June 2022, after clubs were forced to shut down with the pandemic.

Central England and Central Wales saw a particularly high number of closures over the past three years, falling from 209 in March 2020 to 150 in June 2022 - a 39 percent decrease. London still has the highest concentration of clubs of anywhere in the UK, with 221 recorded in June of this year, although even that figure has fallen from 497 in 2006.

As our chart shows, night clubs have been on the decline in the UK since well before the pandemic. Oxford University paper Cherwell cites “redevelopment programs, rising rents and unsympathetic councils” all as reasons clubs have been eventually forced to shut their doors for good. 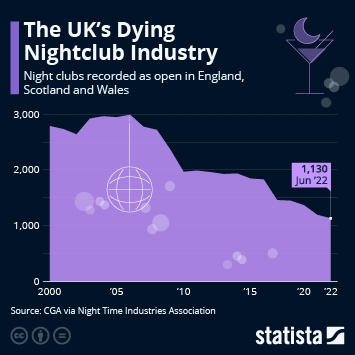 This chart shows how nightclubs are on the decline in England, Scotland and Wales.