40k
57k
41k
9.6k
When Marvel finally released the first trailer for its upcoming superhero blockbuster Avengers: Infinity War on Wednesday, it immediately trended on all platforms, amassing 42 million views and more than 250,000 comments on YouTube in just one day. In the movie, slated for a May 2018 release, Marvel unites many superheroes from previous films including the Guardians of the Galaxy and, obviously, the Avengers to fight Thanos, the supervillain in Marvel’s Cinematic Universe.

According to data published by The Numbers, Marvel’s Cinematic Universe (MCU) is the most lucrative movie franchise of the past few years. Having made their cinematic debut with the first Iron Man movie in 2008, Marvel’s superheroes, including Thor, Captain America and the aforementioned Iron Man proved an almost guaranteed hit at North American box offices. The 17 MCU movies released to date generated $5.24 billion in box office revenue in North America, edging out long-lived franchises like Star Wars or James Bond.

When taking inflation into account however, things look a little differently: thanks to its sustained success over several decades, the Star Wars saga is still the biggest franchise in North America, generating more than $6.5 billion in ticket revenue. Despite its relative youth, Marvel’s Cinematic Universe still ranks second: With adjusted box office sales of $5.67 billion, Marvel narrowly beats James Bond with $5.63 billion. 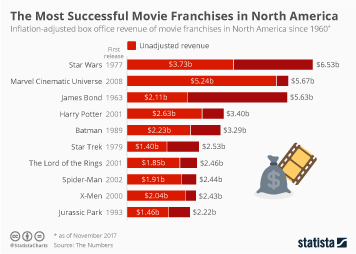 Box Office in the U.S.