88.9k
In response to a suspected chemical weapons attack in the Syrian town of Khan Sheikhoun, the U.S. military has carried out a cruise missile strike on an airbase in Homs Province. At about 04:40 Syrian time, two American destroyers in the Mediterranean, USS Porter and USS Ross, fired 59 Tomahawk cruise missiles at Shayrat airfield. The missiles targeted aircraft, hardened aircraft shelters, petroleum and logistical storage, ammunition supply bunkers, air defense systems, and radars according to statement from the Pentagon.

Tomahawks have been used extensively in U.S. military actions over the past three decades. They were last used to destroy coastal radar sites in Yemen after Houthi rebels fired anti-ship missiles at passing American warships. They usually carry a 1,000-pound warhead and can be launched from vessels up to 1,000 miles away from their intended targets This affords the U.S. military a huge tactical advantage as well as eliminating the risk of losing pilots over enemy territory.

Between the Gulf War in 1991 and the 2001 intervention in Afghanistan, the U.S. fired over 1,100 Tomahawks, according to website globalsecurity.org. They have been heavily used in the initial stages of most military campaigns over the past 25 years including Bosnia (Deliberate Force), Kosovo (Allied Force) and Libya (Odyssey Dawn). Iraq has been in the Tomahawk's crosshairs most frequently since 1991, targeted by approximately 1,618 of the missiles. 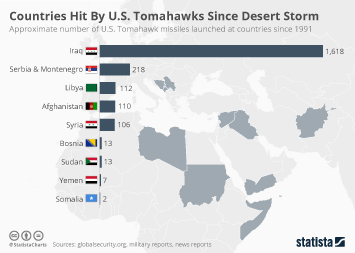 This chart shows the approximate number of U.S. Tomahawk missiles launched at countries since 1991.