Whether to follow friends, family, acquaintances, or actors and people in the art and entertainment industry, social media usage in Nigeria has been on the rise in recent years. For most users, the aim is to keep in touch with close relations. Therefore, it is not surprising that WhatsApp is the most used social media platform in the country. As of the third quarter of 2021, this instant messaging and voice-over-IP platform was used by nearly 92 percent of Nigeria’s overall internet users, ahead of Facebook and Instagram. However, Facebook was the most preferred platform for the majority of individuals accessing the news on social media.

Men and the youth are in the lead in social media usage in Nigeria. In 2022, more than 58 percent of the users were men. This was reflected across platforms. For instance, close to 59 percent of Nigerians on Facebook were men. Moreover, overall Facebook usage was concentrated among individuals aged 18-34 years. The youth and male prevalence remained similar on other social network platforms such as LinkedIn and Instagram. Consequently, young people in Nigeria were the most reached by social media advertising compared to people of other age groups.

As the internet is needed for all social media connections, it plays an essential role in the development of social media in Nigeria. Since January 2017, the number of internet users in Nigeria has kept stable above 85 million, reaching more than 109 million in 2022. An estimated 81 million users accessed the internet by use of mobiles. According to a survey, as of the third quarter of 2021, the majority of internet users protected their digital privacy by declining website cookies, while others either used a VPN or advertisement-blocking tools. Moreover, in 2020, smartphones and tablets were the most common devices from which the internet was accessed, referring to around 84 percent of internet users. Internet affordability also becomes a question in social media usage. As of 2021, the price of a gigabyte of mobile data in the nation, for instance, ranged between 0.88 and 5.25 U.S. dollars.
This text provides general information. Statista assumes no liability for the information given being complete or correct. Due to varying update cycles, statistics can display more up-to-date data than referenced in the text.
Doris Dokua Sasu
Research Expert covering primarily society and agricultural topics for Africa, particularly Ghana and Nigeria
Get in touch with us now
Published by Doris Dokua Sasu, Nov 15, 2022

Share of social media users in Nigeria 2022, by gender

Distribution of social media ad-audience in Nigeria 2021, by age and gender 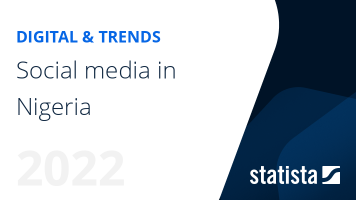 The most important key figures provide you with a compact summary of the topic of "Social media in Nigeria" and take you straight to the corresponding statistics.

Number of users by platform