The number of African social media users has risen continuously, amounting to over 384 million as of 2022. Social media penetration is considerably higher in Northern and Southern Africa than in other regions. As of February 2022, some 56 percent of the population in Northern Africa used social media, while the share was 45 percent in Southern Africa. Central Africa was significantly behind, with a share of only eight percent. In Ghana, Kenya, Nigeria, and South Africa, social media users favored WhatsApp. On the other hand, Egyptian and Moroccan users preferred Facebook.

Northern Africans and men are more present on social networks

Northern Africa had the largest number of users on all social media platforms. For example, there were almost 104 million Facebook users in the northernmost region of the continent in 2022, followed by Western Africa with nearly 58 million. The user base of the rising social network TikTok also followed the same pattern. The potential advertising reach of TikTok in Northern Africa attained almost 28 million, higher than 7.5 million in Southern Africa. Additionally, in four out of five regions of the continent, there were more male social media users, hovering around a share of 60 percent. Only Southern Africa had a slightly higher percentage of women on social media.

Mobile devices were responsible for over 73 percent of the web traffic on the continent as of 2022. In 2020, individuals connected to mobile internet accounted for 28 percent of Sub-Saharan Africa's population. At the same time, the region had the second largest share of people living in areas covered by a mobile broadband network but not using mobile internet. Further, some 19 percent of the people in Sub-Saharan Africa lived in a place with no mobile network.
This text provides general information. Statista assumes no liability for the information given being complete or correct. Due to varying update cycles, statistics can display more up-to-date data than referenced in the text.

Saifaddin Galal
Research Expert covering the economy and society on Egypt, South Africa, and Ethiopia
Get in touch with us now
Published by Saifaddin Galal, Nov 17, 2022 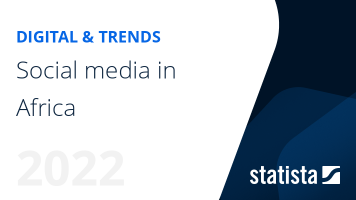 The most important key figures provide you with a compact summary of the topic of "Social media in Africa" and take you straight to the corresponding statistics.