Ghana has around 8.8 million social media users, a number expected to increase in the coming years. Some of the leading social media platforms in the country are WhatsApp, Facebook, Instagram, Snapchat, and Twitter. Besides the growing usage, these platforms are also the most preferred by the country’s population. Also, most users are on the platforms primarily to keep in touch with friends and family, fill their spare time, or make new connections. For this reason, the types of accounts they follow are mostly those of family, friends, acquaintances, as well as entertainment.

For most social network platforms, the share of male users was higher than that of women. In 2022, individuals on Facebook were forecast to amount to 10 million. Nearly 60 percent of them were men, while the remaining percentage were women. Also, most Facebook users in Ghana were between the ages of 18 and 34 years. This age-gender gap is similar to other platforms such as Instagram and LinkedIn. For instance, male Instagram users covered around 60 percent of the total usage, which was dominated by people aged 18 to 34 years.

In Ghana, the majority of the people that advertising firms could reach on social media were men between the ages of 55 and 64 years and women aged 25 to 34 years. Specifically, more than 919,000 Twitter users were potentially reachable with advertising as of 2022. Moreover, men represented around 60 percent of the Facebook advertising audience, while Instagram’s male advertising population reached 57 percent of the total. Overall, the internet advertising revenue in Ghana was forecast at 27 million U.S. dollars in 2022.
This text provides general information. Statista assumes no liability for the information given being complete or correct. Due to varying update cycles, statistics can display more up-to-date data than referenced in the text.
Doris Dokua Sasu
Research Expert covering primarily society and agricultural topics for Africa, particularly Ghana and Nigeria
Get in touch with us now
Published by Doris Dokua Sasu, Nov 2, 2022 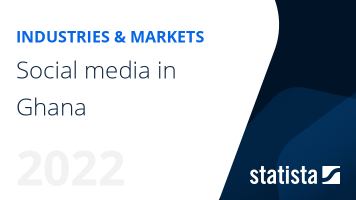 The most important key figures provide you with a compact summary of the topic of "Social media in Ghana" and take you straight to the corresponding statistics.