The number of active social media users in South Africa grew almost three-fold in the last eight years, reaching 28 million in 2022. Keeping in touch with friends and family, followed by reading news, was the fundamental reason for being on social media for South African users as of the third quarter of 2021. Indeed, accounts of friends, family, and acquaintances were the primary type of followed social media accounts for 66 percent of internet users aged 16-64 years. Furthermore, over 95 percent of the online audience used WhatsApp, making the messaging app the most used social network in the country.

Meta Platforms Inc.'s umbrella covers, most famously, Facebook, Messenger, Instagram, and WhatsApp. As of 2022, there were 30.7 million South Africans on Facebook, with the majority of the users aged 25-34 years. Instagram was significantly less popular. In 2022, it had around 24 million users less than Facebook. Individuals aged 18-24 years were the main users of the social media platform. Users on LinkedIn, the business and employment social network, also continued an increasing trend and amounted to 9.9 million in 2022. As for the messaging apps Messenger and WhatsApp, their user base in 2022 totaled 25.7 million and 9.9 million, respectively.

Social media usage in South Africa has been boosted by rising internet connectivity. As of 2021, South Africa was the leading country in internet quality, inclusivity, and mean download speed in Sub-Saharan Africa. In 2021, the country scored 100 points in the African e-Connectivity index, which ranks African countries based on the quality of their internet connectivity. Moreover, South Africa remained on top of other African countries in the internet inclusivity index. This index evaluates the internet based on four categories, internet affordability, availability, the population's willingness to access the internet, and the online content relevance. In 2022, South African internet users amounted to 38.8 million, projected to grow to over 41.9 million by 2025.
This text provides general information. Statista assumes no liability for the information given being complete or correct. Due to varying update cycles, statistics can display more up-to-date data than referenced in the text.

Saifaddin Galal
Research Expert covering the economy and society on Egypt, South Africa, and Ethiopia
Get in touch with us now
Published by Saifaddin Galal, Nov 17, 2022 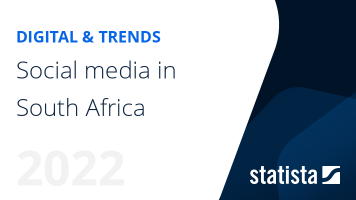 The most important key figures provide you with a compact summary of the topic of "Social media in South Africa" and take you straight to the corresponding statistics.