Fintech in the Netherlands - statistics & facts

In a 2017 survey, 95 percent of respondents indicated they had never heard of the term fintech before. This may be because technological developments in financial services, or fintech, usually involve different parties, such as tech companies, financial institutions, start-ups and e-commerce companies. Fintech in the Netherlands is growing, however, and is most visible in the segments of digital payments, e-commerce and trading. In 2017, the Netherlands was the country with the third-highest internet banking penetration in Europe, behind Norway and Denmark. Additionally, the Netherlands is ranked as one of the leading countries in Europe where it is most common to purchase goods or services online, whilst the use of cash payments has decreased from a market share of 72 percent in 2006 to 40 percent in 2017.
The "traditional" banking sector is the main driving force behind two important fintech initiatives for the B2C market in the country: iDEAL and Tikkie. iDEAL is an e-commerce payment system developed by Dutch consumer banks that allows online shoppers to use their bank account for purchases and is currently the most popular online payment method in the Netherlands with 378 online transactions in 2017. ABN Amro's payment app Tikkie, which lets consumers send payment requests from iDEAL via a text message in WhatsApp, reached three million users in two years after its launch in 2016.

In recent years, the retail payment market saw several developments. First, new online retail banks entered the Dutch market. Knab is a bank that has no offices and operates solely online, while using an app and an online forum to let customers advise each other in the form of a community. Bunq is active in several European countries and uses an app which connects online banking with social activities and a phone's contact list like WhatsApp. After depositing money from your bank account on the account of Bunq it is then possible to use the application to send payment requests to your "friends", to "app" them money or to make special chat groups. Second, Dutch consumers became aware of Bitcoin and other cryptocurrencies. According to a 2018 survey, however, a vast majority of Dutch respondents did not consider Bitcoins to be the future of online spending.

Digital financial services for business customers also find their users in the Netherlands. Companies like Adyen and Buckaroo cover the B2B market as so-called Collecting Payment Service Providers or CPSPs. Adyen is seen as the prime example of fintech in the Netherlands as it is considered to be one of the few European fintech "unicorns" (a venture capital-backed, private business worth over one billion U.S. dollars.) In 2017, Adyen reached a revenue of 1,012 million euros with 3.7 billion processed transactions. The market size of crowdfunding investments was 223 million euros in 2017, an increase of 50 million euros compared to the previous year. The Netherlands was considered to be the leading European country in P2P business lending in 2016. In 2018, three crowdfunding platforms together reached a market share of approximately 55 percent: Collin Crowdfund, Duurzaaminvesteren and Funding Circle. Approximately 19 percent of all crowdfunding projects in the Netherlands were for the catering sector (in Dutch: horeca) in 2017.

Dutch consumers, however, are concerned when it comes to security and privacy issues. When asked about robo-advisors in a survey in 2017, 37 percent of respondents from the Netherlands indicated they would like a computer program to give them financial advice but not make any decisions. 33 percent said they didn't want any automated financial activities at all. Additionally, consumers were reluctant to switch their bank for a Fintech company. According to numbers from September 2016, one percent of all respondents was open for this, citing unfamiliarity with the concept of FinTech.
This text provides general information. Statista assumes no liability for the information given being complete or correct. Due to varying update cycles, statistics can display more up-to-date data than referenced in the text.
Published by Statista Research Department, Jun 7, 2022

Public opinion on financial robo-advisors in the Netherlands in 2017
"I don't want automated financial activities at all", 33%

Public opinion on financial robo-advisors in the Benelux in 2017, by country

Preferred source for financial advice in the Netherlands in 2017
"I (would) never invest money", 45%

Preferred sources for financial advice in the Benelux in 2017, by country 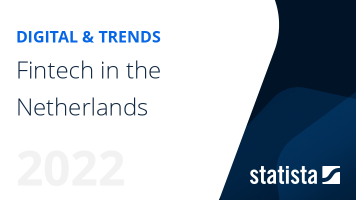 Go to report Fintech in the Netherlands
Top Seller

The most important key figures provide you with a compact summary of the topic of "Fintech in the Netherlands" and take you straight to the corresponding statistics.