Published by Statista Research Department, May 16, 2022
Plant-based sources of protein, such as soy, have become more and more popular in the United States (U.S.) in recent decades. Nearly 14 percent of American consumers follow a meat-free diet. Having a healthier diet or leasing weight as well as concerns about animal welfare are among the main reasons given by consumers who follow vegan, vegetarian, or pescatarian diets. Soy-based products, such as tofu and tempeh, are among the oldest forms of meat alternatives. Additionally, new soy-based meat substitutes are being created in the 21st century and are joining the traditional staples.

Production of soybeans in the United States

Soybeans belong to the oilseed crops category and are among the major agricultural crops sowed in the U.S. The leading soybean producing state in the U.S. is Illinois, with over 672 million bushels produced yearly. The state of Illinois is followed by the states of Iowa and Minnesota, respectively. The growing popularity and thus demand for soy food products is met by growing production volumes. During the last decade, the production of soybeans has increased continuously in the U.S. The U.S. is the second-largest producer of soybeans worldwide, after Brazil. Due to such high production values, the U.S. is also among the second largest exporters of soybeans worldwide. Only Brazil exports more soybeans. Nearly 56 million metric tons of soybeans are exported from the U.S. yearly, while Brazil exports almost 91 million metric tons.

In the following 5 chapters, you will quickly find the 29 most important statistics relating to "Soy food products in the U.S.". 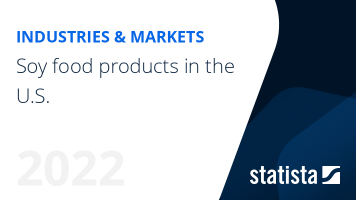 The most important key figures provide you with a compact summary of the topic of "Soy food products in the U.S." and take you straight to the corresponding statistics.