Published by
J. Clement,
Jul 6, 2020
The technology industry is characterized by its constant strive for innovation, growth, and progress. It is, however, also coined by significant disparities in relation to its workforce along gender, race, and ethnicity lines. A closer look at the employee demographics of some of today’s leading online companies reveals a distinct underrepresentation of women and minorities across most computing-related occupations. This issue was made public in 2014, when Google and other Silicon Valley tech titans released their first diversity reports, breaking down their respective workforces by race and gender. These reports illustrated that the companies’ employees were predominantly white or Asian American men, and despite increased efforts at diversifying its labor force, the tech sector is still skewed towards these groups many years later.
Looking at diversity data from 2019, it becomes evident that diversity and inclusion are not yet achieved within the U.S. tech industry. That year, Black and African Americans only accounted for 8.7 percent of employees in computing and mathematical occupations, even though they made up the second-largest minority group in the country. While women accounted for a higher percentage of the workforce at 25.8 percent, this ratio still did not reflect the demographics of the U.S. population.

In the past few years, the number of women in tech has fluctuated within different occupations. In 2019, the share of female operations research analysts and software developers, for example, has decreased significantly. On a global scale, female employees made up less than 50 percent of the personnel at most leading tech companies that year. But apart from the general marginalization of women in the tech sector, it is the shortage of women in high-ranking and leadership positions that stand out as one of the most visible examples of gender inequity in the tech world. As of 2018, only 20 percent of Fortune 500 companies had employed a female Chief Information Officer (CIO). Google, despite its image as vibrant, tolerant, and diverse player, also saw a ratio of less than one female for two male tech employees in 2019, with just 26.1 percent of its global leadership team being female hires.

These discrepancies also translate into the financial differences between White or Asian American tech employees and minority groups. In the United States, the gender wage gap is prevalent regardless of education level, and it stretches across most industries. In the tech sector, women earned lower annual salaries in most entry-level jobs in 2019, just as African American entry-level developers had a lower wage than Caucasian or Asian employees. As a result of this mistreatment and other inequalities, many underrepresented men and women have left the U.S. tech industry in previous years.

While many online companies have committed to fostering diversity and progress is being made, bias training in companies will not suffice as a long-term solution. In fact, the underrepresentation of minorities in these circles can also lead to racial or gender bias in AI systems. If the design, development, and testing of computer systems are being carried out by just one homogenous group, people who fall outside this established data set can face various forms of discrimination that might range from financial to juridical issues. In order to feed new technology with data that represents and serves the general public, a diverse workforce needs to be engaged in its creation.

In the following 9 chapters, you will quickly find the 47 most important statistics relating to "Workforce diversity at online companies".

The most important key figures provide you with a compact summary of the topic of "Workforce diversity at online companies" and take you straight to the corresponding statistics.

Employment in the IT industry 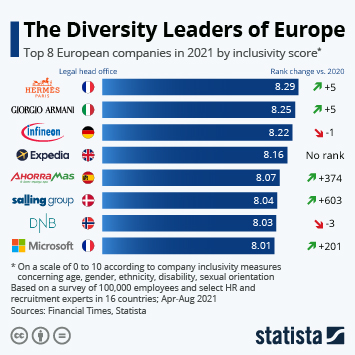 The Diversity Leaders of Europe 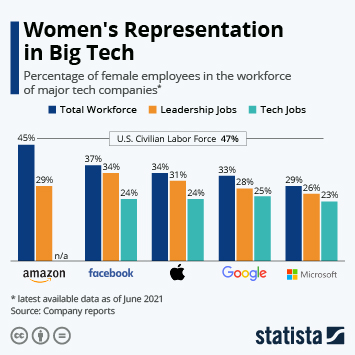