lululemon athletica Inc. is a Canadian manufacturer and retailer of yoga-inspired athletic apparel. From signature fabrics, to hidden pockets and reversible styles, lululemon boasts a variety of sports clothing products with cleverly incorporated features. Although the company is predominantly known for its up-market women’s leggings and yoga pants, lululemon also markets a menswear range, swimwear goods, and yoga equipment.

Since they were founded in 1998, lululemon has successfully expanded throughout North America, Europe, Asia, and Oceania. As of January 2022, the United States held more than half of the enterprise's international stores. At just over 60, Canada used to account for the second-highest number of locations, however, the country has recently been taken over by China, which held nearly 90 stores. The number of lululemon retail stores worldwide came to a total of more than 570 that year.

Over the years, lululemon's e-commerce segment had grown exponentially. 2020 marked the first time the company had generated more of its net revenue through its direct-to-consumer channel than with its corporate-owned stores. DTC sales made up just over half of the total, while the company's physical stores generated less than 40 percent of the revenue. While the coronavirus pandemic may have had a positive impact on lululemon's online sales that year, the spike was not simply a fad, as the DTC segment remained just as lucrative as the physical store segment in 2021.

lululemon’s global revenue has been growing steadily with each consecutive year since 2008 and reached approximately 6.3 billion U.S. dollars in 2021, which is a jump of nearly two billion compared to the previous year. Some 70 percent of these sales were generated in the headquarters' neighboring country of the United States alone. Only about 15 percent of the company’s sales were made outside of North America. This distribution of net revenue also reflects lululemon's global workforce: of the roughly 29,000 people employed by lululemon athletica, an estimated 60 percent were based in the United States. And similar to the customer base, the majority of the company’s workforce was made up of women.
This text provides general information. Statista assumes no liability for the information given being complete or correct. Due to varying update cycles, statistics can display more up-to-date data than referenced in the text.

D. Tighe
Research expert covering shopping behavior, sports and leisure retail, and the subscriptions and direct selling industry
Get in touch with us now
Published by D. Tighe, May 9, 2022

Most valuable clothing brands worldwide in 2022 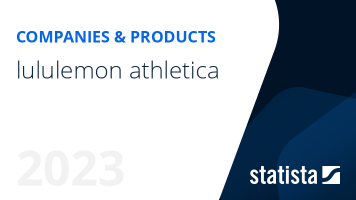 The most important key figures provide you with a compact summary of the topic of "lululemon athletica" and take you straight to the corresponding statistics.