Published by David Lange, Feb 5, 2018
Out of the European countries, Germany has the most people skiing by far with roughly 14.6 million participating in the sport, followed by France with approximately 8.5 million and the United Kingdom with 6.3 million. The share of population who ski in Europe is highest in Switzerland with 37 percent, ahead of Austria with 36 percent and then Norway and Finland with 25 and 24 percent respectively. Similar to the number of skiers, the number of most ski areas in Europe can be found in Germany, with a total of 498 ski areas. There are 349 ski locations located in Italy, 325 in France and 321 in Russia.
In France, 17 percent of people stated skiing to be among their top three favorite sports. When it comes to activities of snow sports vacationers in the United Kingdom, 92 percent take part in a form of skiing. Of these, 39 percent participate in off-piste skiing, 7 percent in ski touring and 3 percent in cross-country skiing. The largest ski resorts in Europe by total length of their slopes are Sestriere in Italy with 400 kilometers of slope, Zermatt in Switzerland with 360 kilometers and St. Moritz, also in Switzerland, with 350 kilometers. Of those who went on ski holidays in Europe, 36 percent consider persuing non-ski activities during the day important and over half of snow holiday-makers in Europe are aware of skiing etiquette such as not overtaking and being aware of speed and behavior.

In the following 5 chapters, you will quickly find the {amountStatistics} most important statistics relating to "Skiing in Europe".

The most important key figures provide you with a compact summary of the topic of "Skiing in Europe" and take you straight to the corresponding statistics. 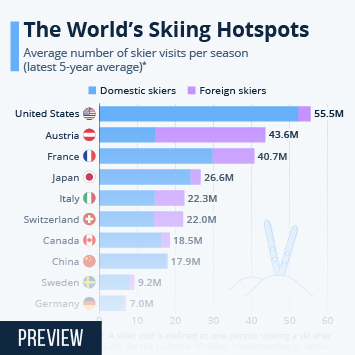