Published by Ian Tiseo, Jul 27, 2021
Electronic waste - commonly referred to as e-waste - is discarded electronic devices that are no longer wanted, not functional, or obsolete. This can include small electronic products such as mobile phones and lamps, to large appliances like refrigerators. The rapid pace at which technology advances today, as well as growing consumer demand, means that many devices reach the end of their useful life after only a few years of use. As such, electronic waste is now the world’s fastest-growing waste stream.

The rapid growth of E-waste

Global electronic waste generation reached a record high of 53.6 million metric tons in 2019. This was an increase of 21 percent in just five years and worked out at approximately 7.3 kilograms of e-waste per capita. Some of this growth was fueled by Asia, where improving economies and incomes have seen electronic products become far more affordable. Asia accounted for almost half of global e-waste in 2019, having produced 24.9 million metric tons worth. The majority of this was produced in China, which is the world’s largest e-waste producer. However, while Asia generates far more e-waste than other regions, on average it produces just 5.6 kilograms per person. In comparison, the volume of e-waste generated per capita in Europe and the Americas is considerably higher, at 16.2 kilograms and 13.3 kilograms, respectively. Many countries that produce the most e-waste per capita are in Europe, such as Norway, the United Kingdom, and France.

In 2019, the global share of e-waste documented to be collected and properly recycled was just 17.4 percent. This is despite electronic products consisting of valuable materials that can be reused or recycled, such as gold, silver, and cobalt – which is vital for rechargeable batteries. Europe has the highest collection and recycling rate of e-waste, at 42.5 percent. There have been proposals in the European Union for countries to legally be required to recycle critical metals found in e-waste as a way to reduce reliance on imports.

Many countries, however, lack electronic waste legislation and regulations. This results in electronic devices often being dumped at landfill sites. Despite Africa having an e-waste recycling rate of just 0.9 percent, many wealthy countries export their e-scrap there. This is becoming a growing problem, especially in Ghana, where one of the world’s largest e-waste sites is located. Electronics can be comprised of harmful substances like mercury, arsenic, and chromium. These toxic substances can leach into the environment when not properly managed, causing adverse health effects in humans as well as environmental damage.

In the following 4 chapters, you will quickly find the 23 most important statistics relating to "Electronic waste worldwide".

The most important key figures provide you with a compact summary of the topic of "Electronic waste worldwide" and take you straight to the corresponding statistics.

Waste Management in the United States

Waste Energy in the U.S. 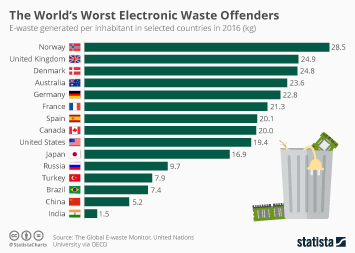 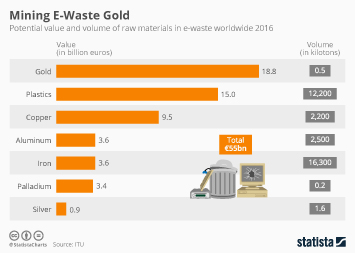 Value and volume of raw materials in e-waste worldwide