Published by Jan Conway, Jun 15, 2021
Beer has been a part of European culture at least as far back as 3000 BC and retains its importance to this day. Several European countries have some some of the highest rates of beer consumption in the world and famous beer festivals like Octoberfest in Germany draw visitors from around the globe. The brewing regions of Europe have also created many of the worlds most loved varieties of beer. It's safe to say Europe is the cradle of the modern beer industry.

All told, the beer market in Europe generated a revenue of 142.5 billion dollars in 2020. This was a significant drop compared to the previous year due to the coronavirus pandemic. Not until 2022 is revenue expected to return to pre-pandemic levels. Along with a drop in revenue, the on-premise share of revenue dropped to its lowest in years. In 2020, 48 percent of revenue was generated on-premise, almost 10 percent less than 2019.

Germany is known worldwide, not only for their love of beer, but also the quality of beer they produce. Luckily for the world, they produce a lot of quality beer to enjoy. Germany was the leading producer of beer in Europe in 2019, at over 91 million hectoliters. Despite this, Germany was not the biggest exporter of beer in Europe. Belgium took the top spot, shipping 18.1 million hectoliters.

In the following 6 chapters, you will quickly find the 44 most important statistics relating to "European Beer Market". 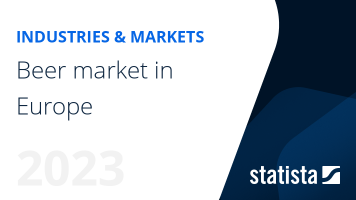 The most important key figures provide you with a compact summary of the topic of "European Beer Market" and take you straight to the corresponding statistics.

Craft beer market in the Netherlands, Belgium and Luxembourg 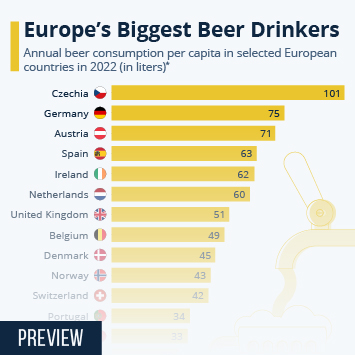 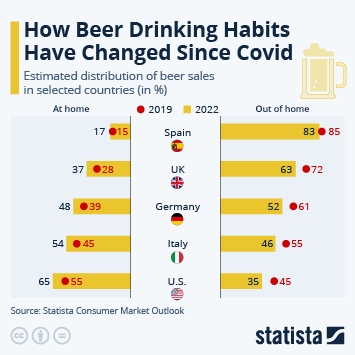 How Beer Drinking Habits Have Changed Since Covid