Published by
Yihan Ma,
Sep 17, 2021
Wine has been produced in China since the Han dynasty (206 BC–220 AD). Thanks to its immense territory and favorable climates, China is the largest grape producer worldwide, contributing to nearly half of the world’s grape production. When it comes to viticulture, it also has the third-largest vineyard area worldwide. For a long time, wine was seen as a symbol of social status and luxury in China. Nowadays, an increasing number of Chinese started to welcome grape wine as a “healthy drink” and enjoy it regularly in their daily life.

With a growing middle-class, disposable income, and globalization, China’s wine market saw an exponential upswing in recent years. In 2020, China’s wine market ranked as the world’s third-largest in terms of revenue after the United States and France. While the annual per capita wine sales and consumption remain low compared to the rest of the world, the demand is rapidly increasing. In 2019, the per capita consumption average was 1.1 liters of wine, a 20 percent increase compared to 2012. Among all wine types, red wine was Chinese wine drinkers’ favorite.

Stimulated by the lucrative market, China’s annual wine production volume proliferated in the first decade of the 21st century. The number of wine manufacturing enterprises peaked at 244 in 2017, of which 14 went public. However, since the second half of the 2010s, China’s domestic wine industry has faced substantial challenges from its foreign competitors due to high production costs and narrowing price margins. As a result, the production volume and number of manufacturers have continuously decreased in the second half of the 2010s. In 2020, demand for wine shrunk significantly in China, as the coronavirus pandemic largely restrained social activities. In that year, three out of five leading wineries in China recorded negative profits.

Imported wine has been associated with good taste and high quality among Chinese wine drinkers, which is often served at business banquets or given as gifts. Chinese consumers welcome new-world wine as much as wine from traditional wine-producing regions. In 2019, France, Australia, and Italy ranked as the most preferred origins of wine among regular wine drinkers in China.

Nevertheless, like the domestic wine industry, China’s wine import market has also gone through turmoil in the past years and the import value has shrunk since 2018. In 2020, it was the fifth-largest wine importer in the world, dropping back from fourth place in the year prior. The plunging wine import volume that year was caused by the coronavirus outbreak and China’s anti-dumping measures against Australia, its largest wine import market.

In the following 5 chapters, you will quickly find the 29 most important statistics relating to "Wine industry in China". 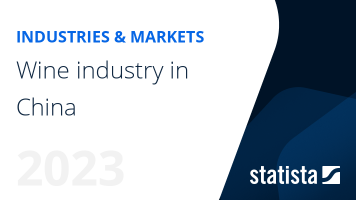 The most important key figures provide you with a compact summary of the topic of "Wine industry in China" and take you straight to the corresponding statistics.