Published by Thomas Alsop, Oct 28, 2020
Fitbit is a California-based company that develops and manufactures compact, wireless wearable technology for the health and fitness industry. Founded in 2007, the company has gained attention due to its rapid growth and success. In November 2019, Alphabet Inc., the parent company of Google, announced its intent to acquire Fitbit in a deal that valued the company at 2.1 billion U.S. dollars. Over the course of just five years, Fitbit’s revenue increased from a little more than 5 million U.S. dollars to in excess of 1.8 billion U.S. dollars from 2010 to 2015. The company experienced a short period of decline since this rapid expansion, with its total revenue decreasing to 1.43 billion U.S. dollars in 2019.
Forecasts suggest that total shipments of wearable electronic devices will eclipse 368 million units in 2020 as Fitbit looks to regain its footing within the growing industry. Fitbit’s first device, the Fitbit Classic, was released to the consumer market in 2009, and had limited features compared to the most recent models. The Fitbit Classic only kept track of steps, distance, calories burned, and activity intensity. In order to stay competitive in the fast-growing wearable technology industry, the company released multiple models and features throughout the years. Fitbit devices on the market vary in price range from around 50 U.S. dollars up to 330 U.S. dollars.

Since 2010, Fitbit has sold over 105 million devices worldwide and has close to 30 million active users. The company is amongst the leading companies in the wearable market. Some of Fitbit’s competitors are well-known companies such as Apple, Xiaomi, Huawei, and Samsung. Fitbit shipped 15.9 million units worldwide in 2019, while Apple shipped over 106 million wearable devices worldwide in the same period.

In the following 5 chapters, you will quickly find the {amountStatistics} most important statistics relating to "Fitbit".

The most important key figures provide you with a compact summary of the topic of "Fitbit" and take you straight to the corresponding statistics. 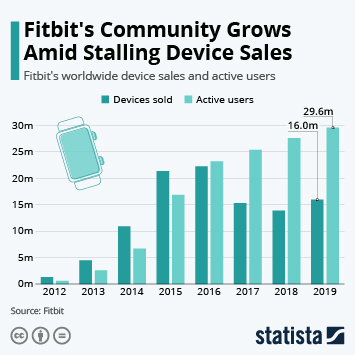