Since its beginnings in the 1950s, television has been integral in connecting the world through news, cultural exchanges, and entertainment. With the dawn of the internet, TV’s role in the world has changed, but not necessarily declined. The number of television-equipped households worldwide rose from 1.47 billion in 2010 to 1.67 billion in 2018. The use of analog methods of TV access has declined sharply in recent years, especially as digital cable and pay IPTV become more and more popular.
Advanced digital methods offer more content and greater convenience to consumers. Over 40 percent of television-equipped households in the United States get their television through wired cable and another 30 percent access it via satellite. Projections indicate that the number of households using digital cable and satellite will increase in the coming years as the market continues to evolve. Just as digital forms of TV access have pushed analog methods out of the market, streaming services have slowly begun to replace digital TV offerings. The number of added paid cable TV subscribers dropped from 3.48 million in the first quarter of 2016 to -0.22 million in the third quarter of 2018.

As of 2019, 74 percent of consumers in the United States reported having a subscription to some form of video on-demand service . Netflix, the most popular service, had an estimated 158.8 million subscribers as of July 2019. TV streaming boxes such as Roku, Amazon FireTV, and Apple TV allow users to access content from across platforms all in one place. Roku is the most popular streaming media player in the U.S., with a 36 percent of the installed base share, followed by Amazon and Apple with 28.5 and 15.5 percent respectively.

TV hardware has also been quick to improve and adapt to the changing ways in which consumers view content. Smart TV unit sales are projected to grow from 198.3 million in 2018 to around 250 million in 2024. Samsung and Vizio are the top manufacturers in the smart TV industry, with market shares of 33 percent and 24 percent respectively in 2018. Household penetration rate for smart TVs in the United States was around 57 percent as of January 2017 and has been steadily growing since the technology first entered the market.
This text provides general information. Statista assumes no liability for the information given being complete or correct. Due to varying update cycles, statistics can display more up-to-date data than referenced in the text.

TV technology with the most household penetration worldwide
Free DTT 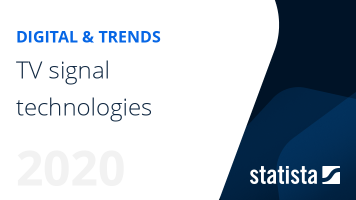 The most important key figures provide you with a compact summary of the topic of "TV signal technologies" and take you straight to the corresponding statistics.