Published by L. Kettenhofen, Nov 30, 2021
Over 64 million women are living in Japan. Japanese women account not only for the majority of the country’s population but also enjoy one of the longest life expectancies in the world. With a longer, more affluent life to live, the lifestyle of women in Japan changed as well. In recent decades, the mean age at first marriage has risen. As children are usually not born out of wedlock, Japanese society shows one of the lowest birth rates worldwide. Rising life expectancies and declining birth rates led to a shrinking and aging society, making it inevitable that women would be further integrated into the country’s workforce. As a consequence, modern Japanese women often find themselves in the dilemma of wanting to build up a career while at the same time having to raise children. Though voices calling for gender equality have gotten louder, traditional gender roles and male favoritism are still deeply rooted in Japanese society.

Given the challenges which the Japanese economy faces, politicians in recent years have acknowledged the need for a social system in which women can maximize their full potential. Despite a high educational level among the female population, the career path of women is usually interrupted for longer periods upon the birth of their first child. After the childcare years, women tend to work part-time, which entails lower wages and fewer career opportunities. Under the government of former Prime Minister Shinzo Abe, policies aimed at supporting the further integration of women into the workforce were dubbed womenomics. These policies aim at, for example, facilitating the availability of childcare institutions, thus enabling higher compatibility of work and family life. Despite an increasing female employment rate in recent years, the number of women in leadership positions, such as managerial positions or among politicians, remains comparatively low. Factors such as long working hours and informal gatherings after work, which represent networking opportunities, make it difficult for employees with childcare responsibilities to advance within the workplace.

The long road to gender equality

The concept of yamato nadeshiko describes the classic ideal of Japanese women: a beautiful but modest female, dedicated to the wellbeing of her family and husband. She is assertive and smart, yet obedient, dependent, and bound to the domestic sphere. While the traditional role of good wife, wise mother is a notion of bygone days, it still affects the way womanhood is portrayed in contemporary Japan.
Many women still feel the social pressure to choose marriage and motherhood. Likewise, men are expected to focus on their careers and provide for the family. As it is not common for fathers to take parental leave, childcare is allocated to mothers. By pausing or even ending their own professional development to focus on child-rearing, women have to financially rely on their husbands. This puts women in a tight spot: in order to comply with conservative expectations, they have to compromise their autonomy.
Besides family and work life, women also face challenges in their love and social lives. Sexuality in Japan is more often than not presented through the male gaze, with women being seen as the object of desire, rather than being sexually assertive themselves. Incidents of stalking, indecencies, or everyday sexism are comparably common in Japan. Due to the exposure victims have to face, women frequently shy away from reporting sexual harassment. This is not only true for Japan but the country’s shame culture, which heavily revolves around not losing one’s face, constitutes an additional hurdle.
Compared to the limitations previous generations had to face, modern Japanese women enjoy more freedom, have better access to education, more job opportunities, and therefore gained visibility in society. But while attitudes on traditional gender roles may have shifted in recent decades, social change has since been a slow, gradual movement and by no means has Japan reached an equal society. However, with rising media coverage on gender issues, an increasing number of scholars and activists concerned with sexism and feminism, as well as an actual need for strong women in Japanese society, the concept of gender equality is likely to be pushed further forwards.

In the following 8 chapters, you will quickly find the 40 most important statistics relating to "Women in Japan".

The most important key figures provide you with a compact summary of the topic of "Women in Japan" and take you straight to the corresponding statistics.

Love and sex in Japan

Women in the Asia-Pacific region 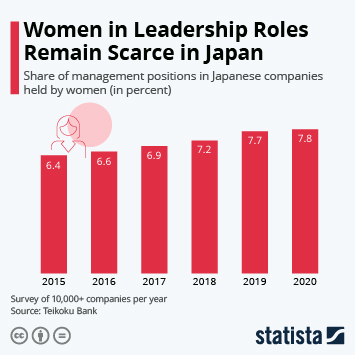