Published by
Marina Pasquali,
Nov 17, 2022
Most markets across the globe experienced a boom in e-commerce with the outbreak of COVID-19 at the beginning of 2020. Within Latin America, Chile had the most consumers showing this side effect. Around two out of three Chilean e-shoppers who participated in a survey said they increased online purchasing during the pandemic, the highest share in the region. The spike is also evident in online sales performance. In 2021, business-to-consumer (B2C) e-commerce sales in Chile were estimated at close to 12 billion U.S. dollars, nearly double that of 2019.

Both digitally native and traditional retailers have stepped up their online operations. In 2020, Mercado Libre, Latin America's leading online marketplace, announced a two-year 100 million U.S. dollar logistics investment plan in Chile. The move is part of the company’s strategy to strengthen its market position in the post-coronavirus era. In the second half of 2021, Mercado Libre's expansion in Chile was already bearing fruit, being the most visited e-commerce site in the country, ahead of any domestic player.

Far from sitting idly by, long-established department store chains such as Falabella and Ripley have turned on full steam in digital transformation. For one, in August 2021, Grupo Falabella revamped falabella.com making it an overarching e-commerce platform including all of its brands – Falabella, Tottus, Sodimac, and its marketplace Linio. Meanwhile, for Ripley, the development of its digital channel was not just an option but a necessity, acting as a lifeline during the pandemic when physical stores faced long-term closure.

Retailers were not the only ones who had to make rapid adjustments to e-commerce. In 2021, Chile counted some 12 million online retail users, up almost two million from before the crisis. Nearly a third of these users were adults in their twenties, typically digitally savvy yet with some financial independence to afford their own purchases.

Nonetheless, Chile still struggles with income inequality. Consequently, informal trade remains an attractive alternative for sellers and consumers alike, even on the web. That year, informal e-commerce accounted for about 11.5 percent of total digital transactions. But a challenge for digital commerce in Chile today could mean opportunity tomorrow. If informal e-retailers eventually transitioned into the formal economy, this could lead to further growth in Chilean e-commerce.

In the following 5 chapters, you will quickly find the 34 most important statistics relating to "E-commerce in Chile". 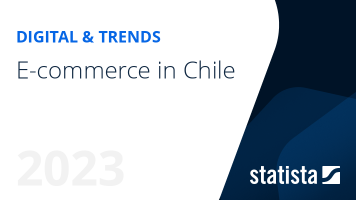 The most important key figures provide you with a compact summary of the topic of "E-commerce in Chile" and take you straight to the corresponding statistics.