Although typically done in brick-and-mortar stores, buying furniture online has become a developed segment in the e-commerce world. In the United States, furniture and homeware e-commerce generated around 133 billion U.S. dollars in 2021. In the same year, sales in this sector accounted for 17 percent of total retail e-commerce in the country. While this share of online sales is projected to decrease in the next few years, the household goods and home improvement category still has a compound annual growth rate of ten percent, beating out both the electronics and media retail e-commerce segments.

Mainstream furniture e-commerce is yet to come

Despite sales figures, online sales of furniture and home furnishings still have a long way to go to prevail over the physical channel. In 2022, only 12 percent of online consumers in the United States mostly bought furniture and household goods online rather than offline. Additionally, when reviewing digital purchases made in the past 12 months, less than two out of ten U.S. internet users had acquired furniture and household goods online. At the same time, this is what makes it an e-commerce segment with ample potential to grow. Although mainstream adoption is lacking, there is a positive outlook for e-commerce furniture sales as return rates in this product category are quite low. A mere seven percent of U.S. digital buyers returned furniture or household items purchased online in the previous 12 months, compared to 26 percent of online fashion shoppers, the segment with the highest percentage of online returns.

Shoppers being wary of committing to big-ticket purchases via the internet is perhaps a focal reason that online furniture is not as large as other e-commerce sectors. It is up to retailers to make potential buyers feel comfortable about shopping online for home goods. In the U.S., there are a handful of well-known brands that have managed this feat, and thus have captured consistent and loyal online shoppers. For example, Wayfair, with a revenue of nearly 14 billion U.S. dollars, was recognized by nearly eight in ten U.S. online furniture shoppers in a 2022 brand profile survey. The Home Depot, one of the leading retailers in the U.S., reported that around 14 percent of their total sales were made through e-commerce.

Other companies that offer online furniture shoppers to consumers, like IKEA and Overstock, were also well known among online shoppers. Nearly half of surveyed furniture e-commerce users reported that they liked IKEA, while 20 percent felt the same about Overstock.

Despite being reputable among consumers, the biggest players in the furniture e-commerce sector were unable to avoid the plethora of e-commerce layoffs that took place in 2022. With the worsened economic state following the COVID-19 pandemic and along with striking inflation rates, Wayfair, Home Depot, and Overstock all announced employee layoffs to some degree in the same year.
This text provides general information. Statista assumes no liability for the information given being complete or correct. Due to varying update cycles, statistics can display more up-to-date data than referenced in the text.
Published by Statista Research Department, Oct 10, 2022 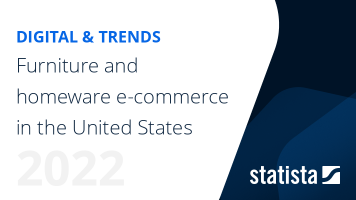 The most important key figures provide you with a compact summary of the topic of "Furniture e-commerce in the United States" and take you straight to the corresponding statistics.