The toy industry in Japan is operating within a revolving market influenced by media trends, technological innovations, and fandoms in popular culture. Covering a broad range of analog and electronic products, the Japanese toy market is one of the largest worldwide, targeting children and adults alike. However, within an aging society characterized by fertility decline and a shrinking population of children, manufacturers are looking towards adolescents and adults to stimulate growth. Addressing the interest in creating and maintaining collections of a variety of merchandise such as card games and figurines, companies supplement their standard toy series with regular releases of limited-edition merchandise.

The Japanese toy market is closely connected to the amusement and gaming markets, with manufacturers frequently collaborating with brand developers of related segments through subsidiaries and licensing agreements. Industry leaders like Tomy Company, Ltd. is a major example of a successful children’s toy manufacturer that expanded its portfolio with licensed goods by acquiring the merchandising rights for brands like Pokémon and Disney. Other brand developers like Sanrio Co., Ltd., however, operate in the industry themselves to produce and distribute goods based on their intellectual properties without going through established manufacturers.
While children’s toys are a standard section at assorted and large-scale retailers, a common sight within the Japanese retail sector are specialty brand retailers and time-limited pop-up stores distributing character-focused goods. Apart from product purchases through general retail channels, amusement facilities are another method to acquire licensed toys. Exclusive goods like plush toys are commonly offered as prizes in game machines, with prize games like claw cranes being major profit generators in amusement arcades.

Popular culture drives toy sales in Japan. The life cycles of licensed products are commonly tied to the serialization of a manga series or the release of anime seasons, video games, and movies in Japan. Traditional toys are mostly based on simple designs with an educational function for young people, but modern toy designs are commonly influenced by the culture of cuteness (kawaii) and current media trends. Product lines inspired by popular mascots and fictional characters in Japan are contributing to the success of toys in the character merchandising segment, being in demand among children and adults.
Another driver of the domestic toy market are fandoms of major franchises that are the targets of limited releases of mostly small collectibles. Ranging from time-limited figurines sold through capsule toy vending machines (gacha) to long-lasting products like character models, dedicated fans, so-called otaku, are boosting the demand in the adult population and creating new market opportunities.
This text provides general information. Statista assumes no liability for the information given being complete or correct. Due to varying update cycles, statistics can display more up-to-date data than referenced in the text.
Published by C. Diep, Nov 9, 2022 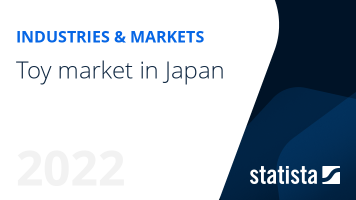 The most important key figures provide you with a compact summary of the topic of "Toy market in Japan" and take you straight to the corresponding statistics.