Published by
Sanyukta Kanwal,
Jul 8, 2022
After reporting its first case in late January 2020 in the southern state of Kerala, India introduced rigorous airport screenings for the coronavirus (COVID-19). The following weeks saw a quick succession of events leading to a suspension of all travel in and out of the country by March 22 that year.
While infections continued to increase during this period, Indians were now confined to their homes to contain the spread of the virus. The announcement did not come without chaos – it created widespread panic, specifically among lower classes of society including farmers and migrant workers who were left stranded and jobless overnight from their faraway homes and no mode of transport. Despite the government announcing a relief package of 1.7 trillion rupees, it was clear that a large portion of the country’s population was going to be scouring for livelihoods.

Economists slashed GDP rates for the foreseeable future due to the obvious impact of the lockdown. However, it was also estimated that the country might bounce back quickly because its industry composition, with unorganized markets being largely dominant. Losses from organized sectors amounted to an estimated nine trillion rupees in late March, projected to increase with the prolonging of the lockdown. Unsurprisingly, the most affected industries included services and manufacturing, specifically travel & tourism, financial services, mining and construction, with declining rates of up to 23 percent between April and June 2020. Towards the end of 2020, however, India saw some semblance of recovery across certain sectors. This was a result of easing restrictions, controlled infection rates and the festive season between October and November 2020.

The pandemic came with uncertainty and implications on all aspects of business across the world. Despite India being ahead of most countries in being able to implement work-from-home measures, specifically in white collar work, job and earning deficits, along with instability in prices was expected. The months of the lockdown resulted in the free fall of employment, which slowly stabilized after the economy steadied in most parts of the country.

Segments including consumer retail expected to see sharp falls ranging between three and 23 percent depending on the market. For the big players across segments, this meant operating at less than full capacity to keep afloat. For small businesses, however, it depended on how long they could ride out the storm. Overall, the pandemic changed daily lifestyles drastically.

Economic activity started to take a hit yet again since March 2021, as the country faced its second wave of the pandemic. As a result, GDP forecasts were expected to fall, putting losses at over 38 billion U.S. dollars if local lockdowns continued till June 2021. Unprecedented numbers in terms of infections and deaths recorded across the country led to another set of lockdowns in some parts, burdening the healthcare system in the midst of government controversy. International aid in the form of oxygen cylinders, PPE kits, ventilators along with funding was being sent from various countries to what looked like a dire situation.

In the following 5 chapters, you will quickly find the 30 most important statistics relating to "Coronavirus (COVID-19) - economic impact on India".

The most important key figures provide you with a compact summary of the topic of "Coronavirus (COVID-19) - economic impact on India" and take you straight to the corresponding statistics. 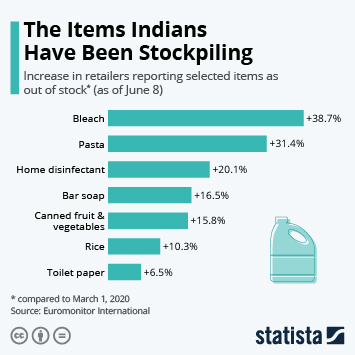 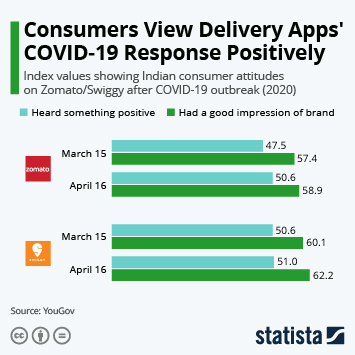