Russia has one of the largest coal industries worldwide. The country possesses second-largest proven coal reserves after the United States. Production of this fossil fuel is especially developed in Siberia and the Far East. Russia ranks sixth worldwide by coal production and consumption. The coal produced in the country is primarily supplied to power generation, coking, and export trade. Russia is home to several major coal companies, such as Siberian Coal Energy Company (SUEK), Kuzbassrazrezugol (KRU), and SDS-Ugol.

Impact of the war in Ukraine on the Russian coal industry

Coal prices worldwide increased during the Russian invasion of Ukraine in 2022. Between February 24 and June 1, 2022, the average price of coal was 69 percent higher than in January 2022. Several Western countries, such as European Union (EU) members and the United States, banned coal imports from Russia as part of sanctions on the country. At the same time, China increased its imports of Russian coal. These were nearly eight million euros daily higher in July and August 2022 than in February and March 2022. In total, Russia shipped around three billion euros worth of coal to China in the first eight months since the invasion. Moreover, coal exports to India reached 1.5 billion euros.

Russia aspires to become the world's leading coal exporter. At the moment, the country exports the third-largest volume of coal after Indonesia and Australia. Over the past decade, Russia's coal export shipments have increased, and in 2021 they exceeded 210 million metric tons. The industry is shifting its coal export ambitions to Asia-Pacific (APAC) markets — China being the leading destination. Russia is upgrading and expanding the Trans-Siberian and Baikal–Amur Mainline (BAM) railroads which carry coal and other commodities for export to Asian countries. For the coal sector, a shift to Asia is considered an opportunity to generate as much revenue from coal exports as possible before the demand for that fossil fuel declines in all global regions.

The industry is undergoing transformation under a state program until 2035. One of the steps in the development strategy is opening new mines. As of January 2022, 69 new coal mines were proposed in the country, 13 of which were already under construction. Under the optimistic scenario, the Russia's energy ministry forecast an increase in coal production by 66 percent in 2035 compared to 2020. Other steps involve modernization of infrastructure and employment of deep coal processing. The latter refers to technology that enables production of liquid fuels, coke, and other chemical products from coal. This would enable companies to process coal directly at their sites and increase their earnings by selling processed products.
This text provides general information. Statista assumes no liability for the information given being complete or correct. Due to varying update cycles, statistics can display more up-to-date data than referenced in the text.
Published by Statista Research Department, Nov 21, 2022 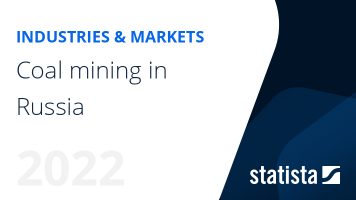 The most important key figures provide you with a compact summary of the topic of "Coal mining in Russia" and take you straight to the corresponding statistics.