Published by
Julia Faria,
Apr 13, 2022
As of April 2022, the number coronavirus (COVID-19) cases in East Africa corresponded to roughly 11.5 percent of the total number of infections on the whole African continent. The vaccination campaign has started in most of the countries in the sub-region. However, it follows a slow path. In Ethiopia, the most affected East African country, around 25 vaccine doses per 100 people were administered so far. In Kenya, the rate was around 32 doses per 100 individuals.

The death toll from the COVID-19 outbreak in East Africa reached 26,000 in April 2022. Additionally, the health crisis has a high human cost, strongly affecting livelihoods. For instance, the majority of Kenyans stated they had difficulties with paying rent during the pandemic. In Ethiopia, 37 percent of households reported reduced incomes. Furthermore, the number of people facing food insecurity in East Africa has been following an increasing trend and reached 52 million in November 2021.

Urgent spending to curb the pandemic’s effects generated a surge in public debt in East Africa, a challenge to be faced by most of the countries in the region. To diminish the impacts of the outbreak, many nations announced extra healthcare spending and stimulus packages to aid fiscal relief. That, associated with weaker economic activity, resulted in an estimated debt-to-GDP ratio nearly or above 50 percent in the majority of East African countries as of 2021.

Recovery and the future

Additionallly, lockdown measures imposed to contain the COVID-19 came at a cost for East Africa’s economy, leading to reduced levels of external trade, as well as disruptions in the tourism market and the services sector. However, the fastest growing region in Africa might resume its track already in 2021. For that year, GDP growth was estimated at 4.1 percent, against 0.4 percent in 2020. Also, the projections indicate that the region's economy should keep growing in 2022 and 2023.

In the following 5 chapters, you will quickly find the 32 most important statistics relating to "Coronavirus (COVID-19) in East Africa".

The most important key figures provide you with a compact summary of the topic of "Coronavirus (COVID-19) in East Africa" and take you straight to the corresponding statistics. 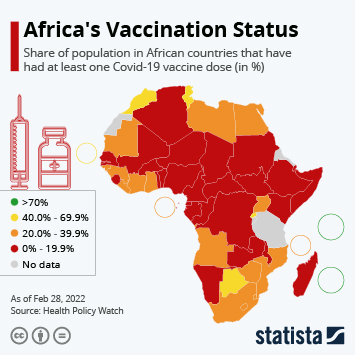