There is no stage in life where paying attention to a good nutrition is not beneficial. However, if there is a period when eating well becomes a particularly valuable practice, it is during the first years of life. The way in which babies, toddlers and children are nourished, does not only determine how they feel during those first years. It also impacts how they develop into adulthood. As the benefits of eating well during those early stages become more evident, a larger amount of parents start paying special attention to proper feeding practices for their children. As a result, the infant nutrition industry has been expanding, reaching a worldwide value of more than 67 billion U.S. dollars in 2019. In Latin America, despite a constant decrease in the population growth during the last years, the value of the infant nutrition market in the region has been estimated to increase in the coming years.

From breastfeeding to solid foods

The official recommendation of the United Nations concerning nutrition during the first five months of a baby’s life is focused on exclusive breastfeeding. In Latin America, an average of 38 percent of infants are exclusively breastfed until their fifth month of age. However, feeding practices during that stage are not homogenous in the region. While in Central America the recommendation is followed for approximately 33.2 percent of babies, in the Caribbean this figure drops to close to 26 percent.

As babies grow into their sixth to eight month of age, the international organization advices the introduction of solid, semi-solid, or soft foods into the children’s diet. Although more than eight out of 10 of Latin American parents follow this advice, only 62 percent fulfill the recommended minimum diet diversity of four or more food groups a day. Moreover, considering the mentioned parameters, plus meal frequency which depends on age and other factors, it was calculated that less than half of children aged six to 23 months were receiving a minimum acceptable diet in the region.

The reasons for following infant feeding practices different from the officially recommended, vary widely. From complications with breastfeeding, to misinformation or a lack of resources, parents are presented with a complicated task. Overall, spending during pregnancy and the first year of life can become expensive, and it varies between one country and the other. According to a study carried out in 2020, the difference of this figure between Peru and Brazil amounted to approximately 3.6 thousand U.S. dollars. What is more, the share of total expenditure assigned to food also differs. While in Mexico nearly 10 percent of the total baby expenditure was allocated to food, in Argentina it surpassed 18 percent. There is, however, something that remains relatively constant throughout the region, and is presumably related to quality. No matter the country, buying premium foods is in average 20 percent more expensive than purchasing classic products.
This text provides general information. Statista assumes no liability for the information given being complete or correct. Due to varying update cycles, statistics can display more up-to-date data than referenced in the text. 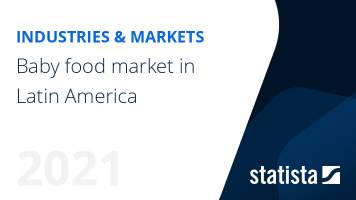 The most important key figures provide you with a compact summary of the topic of "Baby food market in Latin America " and take you straight to the corresponding statistics.